In the updated Tale of 4 Physicians 2021, we analyzed the impact of different spending budgets on wealth creation.  Each of our 4 physicians was married with 2 kids and had a total household income of $340,000.

We’ll revisit one of these physicians to explore what might happen to her nest egg if she were to continue working by choice after achieving financial independence (FI).

I try to stress the FI part of FIRE, and I fully realize that not everyone who achieves financial independence will be ready to retire as soon as they’re financially able.

I’ve previously explored the power of working one more year. In this exercise, the good doctor will work another 5, 10, or 20 years and we’ll see that impacts her financial future. 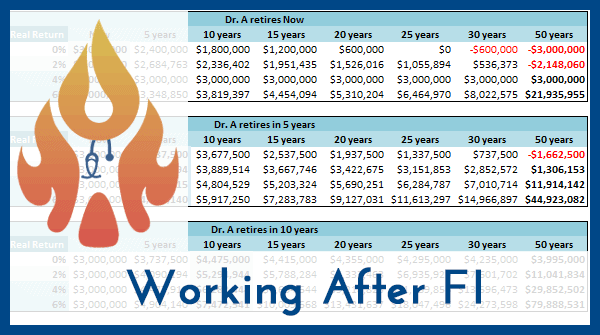 Let’s have another look at her numbers. 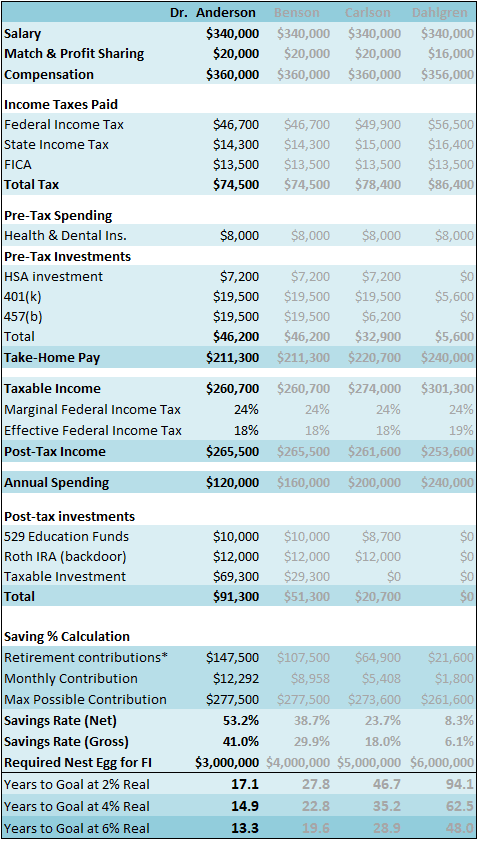 OK, fast forward 15 years to 2036. Dr. Anderson has stayed the course, her index funds have given her market returns, which haven’t been stellar, but have outpaced inflation by 4%.

She doesn’t love every aspect of her workday, but finds fulfillment in providing care to her patients. She knows that she could retire today, and likely have enough money to support her and her family for decades with a 4% withdrawal rate.

However, there are many uncertainties. She won’t be eligible for medicare for more than 20 years and she has no idea how our health care system might change in the meantime. She and her husband may live another 50 years or more.

From her reading, she knows that the 4% withdrawal rate was considered safe for a 30-year retirement, but she’s only in her mid-to-late 40s. She realizes that a withdrawal rate closer to 3% might be wise for her.

She can’t imagine retiring at this age after all the sacrifices she has made to practice medicine, a rewarding career that she still feels is her calling. She’s simply not ready to hang up the stethoscope and she wonders how her financial picture might change if she chooses to work another 5 or 10 years or more.

Allow me to channel my inner mathlete and work some numbers for Dr. A.  To keep things simple, we’ll use real (inflation adjusted) returns, rather than nominal returns. That will keep us looking at dollar amounts in terms of their purchasing power today.

We’ll also assume that she’ll maintain a budget equal to $120,000 in 2021 dollars, even after the mortgage is paid off and her children’s  529 plans are fully funded. Perhaps she’ll use that money to travel more or for charitable causes.

If Dr. A retires now and maintains her current level of spending, the equivalent of $120,000 today (and rising with inflation), she’s got a good shot at making her money last.  If she earns 4% real, her nest egg will remain steady.  A better return will allow her nest egg to slowly grow while she lives out a long, comfortable retirement.

If her baseline spending exceeds her returns, she will watch that nest egg shrink over time.  If her returns only match the rate of inflation, giving her a 0% real return, she will run out of money in 25 years. Things start to look really bad if we look 50 years out when she’ll be in her mid-to-late 90s if she doesn’t manage to beat inflation with her investments.

Can Dr. A avoid catastrophe in the case of a long-term sluggish market?

Sure.  She should expect to have a social security check coming her way eventually, having contributed the max for 15 years.  She will also be able to cut back on expenses in lean years, more easily after the mortgage debt is gone.

What are the odds of 25 years of 0% real return?  If she has a diversified portfolio, I would say it’s quite slim.  Even the best-case scenario offered, a 6% real return, is just below what the U.S. stock market has given in the modern era. It doesn’t hurt to be conservative when retirement planning, though.

In this scenario, Dr. Anderson achieved FI in her mid-to-late 40s, but chooses to work until after her 50th birthday.

Doing so nets her an extra $700,000 to $1,900,000 depending on market returns. Those extra dollars go a long way toward providing future financial security and potentially substantial wealth.

Again, she could run out of money and be deeply in debt 50 years from now if several very bad and avoidable things happen. As in her investments only match inflation, she makes no adjustments in spending, and picks up no additional sources of income (like Social Security or a side gig).

On the plus side, returns besting inflation by only 2% give her more than $1 Million in 2021 dollars after half-a-century.

Real returns of 4% to 6% will allow her nest egg to grow into the 8-figure range, with as much as about $45 Million if she lives another 50 years and keeps spending at that level of $120,000 in today’s dollars. That may not be the most realistic; I think most of us would find ways to spend more if we were sitting on a portfolio that size.

What a difference 5 years makes!

At the 10 year mark from her original FI / potential retirement date, she’ll have anywhere from 50% to 250% more money earning investment returns of 0% to 6% real.

With the big cushion that working another 10 years gives her, there is little fear of that nest egg running out, even in the bleakest scenario we’ve laid out. With 0% real returns and zero adjustment in spending, she’s got over 47 years worth of spending money.

In fact, in every realistic scenario, she can expect to be a multimillionaire the rest of her life, and she can now focus her energies on how to best utilize her oversized nest egg. She could have a strong future in philanthropy if she earns 4% to 6% above inflation, ending up with about $20 Million to $60 Million in 2021 dollars as her age approaches the century mark.

Time to contact the alma mater to look into getting her name on a building or two.  The Anderson Center for Financial Awesomeness sounds about right.

By spending more than most Americans, but less than most of her physician colleagues, Dr. Anderson can expect to have more than $5 Million in her portfolio indefinitely. If her investments return a little more than the best-case 6% real, she could be looking at a 9-figure portfolio in the distant future!

One thing that’s worth noting here is that the 20-year net worth numbers are not massively different than those of the version of Dr. A that retired 10 years earlier. The extra 10 years nets her $1.6 Million to $2.2 Million more, but when we’re talking about portfolios in the $5 Million to $15 Million range, is that delta clinically significant?

Will it impact how she lives out the rest of her life? I would argue that it does not, but the freedom to live her life as she pleases from her late 50s to late 60s (rather than working another 10 years) would have a more profound impact on the life she leads. Now, if her best life includes full-time work for those years, more power to her.

What Would You Do?

I think a dozen people could look at the data and come up with 13 opinions.  Some will wonder why she doesn’t retire in her 40s when she achieved FI, since she’d have a very good chance of making her money last with a comfortable retirement.

Others will pick their jaw up off the floor after seeing a potential net worth north of $84 million and wonder why anyone in their right mind wouldn’t strive for that.

Let’s look at all of the data in one place.

Any time I run a scenario like this, what strikes me is the fact that the biggest factor in determining her future wealth is not how hard she works but how hard her money works.

For example, if she retires now and earns 6% real on her investments, in 25 years, she could have more money than if she were to work 20 of the next 25 years but earn a 0% real return.

Keep your fees low, invest in a diversified mix of stocks, bonds, and perhaps real estate, and let compound interest do the heavy lifting.

*Accounting for inflation can be complex and I’m striving for simplicity here.  For example, a 4% real return could represent a 5% return with 1% inflation or a 7% return with 3% inflation.  The final values in absolute dollars will be a bit different with different scenarios, but using an inflation-adjusted return allows us to think of future values in terms of what that money would buy today.

**Another factor that will skew the numbers is the sequence of returns.  My simulation assumes a steady growth rate that doesn’t vary, which is not how the markets work.  Negative returns late in one’s career are more detrimental than negative returns at the end of one’s career when the nest egg has grown quite large.  Again, I’m trying to keep it simple here. Please understand that returns will vary.

How about you?  What would you do in Dr. Anderson’s situation?  Retire now?  Work indefinitely?  Learn how to spend more and retire somewhere in between?