If you’ve been following the FIRE movement, you’ve got a pretty good idea of what it means to be financially independent, and can appreciate the power that financial independence provides.

Chief among the benefits is the ability to retire early; your investments should adequately provide for your spending needs indefinitely at a withdrawal rate less than or equal to four percent.

That’s a great thing! But what if, like me, you’re not ready to hang up the stethoscope quite yet. You know you’ll miss your patients and colleagues, and frankly, you’re too young and good looking to be retired!

A frequent topic of discussion among the FIRE community members is a constellation of symptoms that describe OMY syndrome. Is it a real thing? Oh, My Yes. A real thing called One More Year syndrome.

What is One More Year Syndrome?

To be afflicted with OMY syndrome is to continue working for “one more year” even though you’ve reached your financial goals, and no longer need the paycheck to make ends meet.

OMY syndrome is often looked down upon in the forums as a weakness in fortitude. If you can afford to retire early and choose not to, you are clearly guilty of some sort of moral failing.

The world is your oyster, and you’re afraid to open its shell. The only prescription is to retire, and fast. Of course, not everyone feels this way, but it seems to be a common opinion.

When I read such opinions, I’m reminded of the classic film Swingers in which nice guy Mikey is being “coached” by his buddies on how to approach the pretty girl at The Derby:

Mikey appreciates the confidence boost, but he doesn’t need to go for the kill; he’s going to take his time, and do things his own way. Don’t worry; he’ll get what he’s after, playing his cards in his own way.

It’s like that with early retirement. You don’t have to do what your peers or internet strangers think you should do, or tell you to do. You do what works for you. Financial Independence can be a starting point to begin contemplating an early retirement plan, rather than an end point. Of course, retirement in any form is completely optional.

I’d like to discuss the positive aspects of OMY syndrome today. If you’re not miserable in your job, OMY syndrome can be a real boon to your financial future. Even more powerful are OMY syndrome’s cousins, FMY (five more years – a syndrome of which I am guilty) and TMY (ten more years) syndrome. Incredible wealth can be attained if other variables (namely spending) remain the same, as we learned from Dr. A when she chose to continue working after achieving FI.

If you are on the brink of an early retirement as a physician, you are in an enviable position. You’ve got a high savings rate (calculate yours here), and you’ve paid down your mortgage. You’ve got Enough to live a comfortable life. If you can give the career one more year, you might be able to do some amazing things with that money.

Financial Benefit of One More Year

How much money are we talking about? In one year, a physician with a high savings rate can not only cover living expenses for the year, but also put away anywhere from $50,000 to $250,000 or more depending on specialty and salary.

The net effect of working one more year is equal to after-tax pay. You have to take into account both the usual year’s savings plus the amount you spend from paychecks rather than spending down your portfolio as you will in retirement. For full-time physicians earning $200,000 to $500,000, after-tax pay would be in the neighborhood of $140,000 to $300,000 for one more year.

That kind of money could buy one or two tremendous vacations per year, or be an entire year’s travel budget for a frugal or infrequent traveler.

I’m sure you could come up with a whole bunch of ways to spend that kind of money. You may have noticed that none of my suggestions are objects; they’re experiences. Well, technically beer is an object, but I’ve come to find it can most certainly lead to experiences, and the enjoyment of a good craft beer can be an experience in and of itself. I favor experiences over things, and happiness studies do, too.

I’m not going to tell you what you should or shouldn’t do with your OMY money. You don’t have to stretch it out over the length of your retirement. If you want things, buy things. Things doesn’t even have to be plural; it’s your money and you can blow it all on a thing. Like a Bentley, if that’s what you really want.

You don’t have to spend the money.

I’ve shared some ideas of different ways you could spend the extra OMY money, but you don’t have to spend it at all. If your FI number was based on your anticipated retirement spending, you probably accounted for the season passes and plane tickets, and at least a modicum of beer, wine, kombucha, or whatever little luxury you enjoy.

What if you let your OMY money ride? Using a compound interest calculator, you can see that $200,000 left alone for 40 years can be expected to become millions. 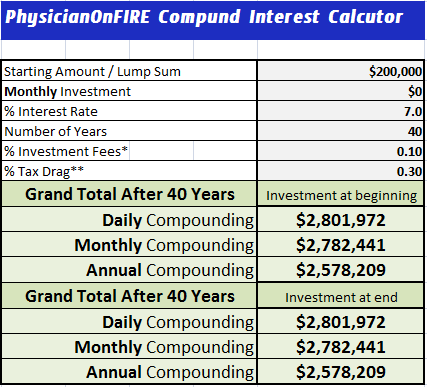 Now you can afford a fleet of Bentleys, even after accounting for inflation, but you probably won’t want that when you’re in your eighties or nineties. But you could do something awesome, like help fund a new YMCA building or incredible community park with your name on it.

Or a statue. You deserve a statue.

If you plan to do a fair amount of charitable giving in retirement, it’s best to plan for it several years before retiring. I’m an advocate of using a donor advised fund (but WCI is not) to build up a large reserve from which you can give.

My OMY giving plan is this: use my last several years of paid employment to build up a sizable DAF, giving up to 30% of adjusted gross income (AGI) each year until the DAF is equal to 10% of my own invested assets. [post-publication edit: goal achieved]

Why 30% over several years? I will intelligently donate mutual funds with significant capital gains. The cost basis becomes irrelevant when received by the DAF, and nobody pays capital gains taxes. When giving appreciated assets, the IRS limits donations to 30% of AGI. When donating cash, the limit is raised to 50%, but I want to give in the most tax-efficient manner, so I’m not donating cash.

Also, I want to give now while I’m in a high tax bracket, to benefit from a larger tax deduction. Waiting until I’m retired to build up a DAF would represent a missed opportunity.

When giving appreciated assets, the IRS limits donations to 30% of AGI. When donating cash, the limit is raised to 50%, but I want to give in the most tax-efficient manner, so I’m not donating cash.

When you have a high salary, One More Year can make a big difference for you, your family, or for people and causes that matter to you.

Have you been blessed with the opportunity to work OMY? Is it something you’ll consider when you reach your goal retirement number? What would you do with your OMY money?

20 thoughts on “The Power of One More Year”