It’s time to tinker with the hypothetical life of another one of our 4 physician friends.  Doctors Anderson, Benson, and Carlson have taken their turns, so we’ll turn our attention to Dr. Dahlgren.

With only $20,000 in annual tax deferred savings and a high rate of spending, Dr. D was on track to work more or less indefinitely. 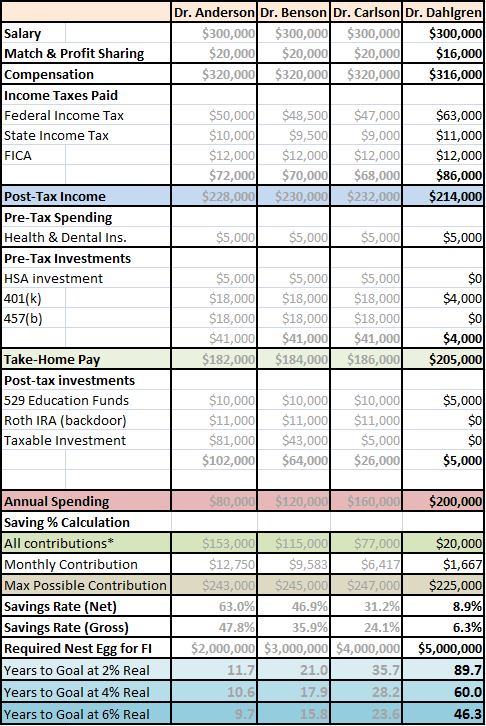 After a lousy round at the country club, Dr. D looked over PoF’s analysis and didn’t like the numbers he saw any more than the double bogies he recorded on the course.  One of his buddies in the foursome was 18 months into fighting an unfair malpractice claim, and another just learned that his 56-year old brother was diagnosed with pancreatic cancer.  Dr. D worked hard to pay for his club dues, private school tuition, and the precious pony’s stable fees, but he couldn’t see himself keeping it up forever.

Dr. D had a heart-to-heart talk with his dear wife, and together they decided it was time to scale back on the spending.  Over the course of a year, they traded in their overpriced vehicles, enrolled the kids in public school, started golfing at the municipal course, and sold the beachfront condo.

They weren’t able to let go of all their spendthrift ways, but found they could live quite comfortably and happily with a $120,000 a year budget.  Assuming Dr. D had his change of heart around the time Dr. A became financially independent, 11 years had passed since we first met our 4 physicians.  We’ll assume Dr. D had a 4% real return like his colleagues, accumulating $277,000 in those 11 years.  Let’s see how the 40% reduction in annual spending changes Dr. D’s timeline to becoming FI.

Excellent!  It’s not too late for Dr. Dahlgren to make meaningful changes. He was hoping to be able to retire in this lifetime, and it appears he can now afford to retire in his fifties.  The $80,000 in lifestyle deflation gave him a smaller nest egg goal and allowed him to save an extra $102,000 per year.  Financial independence can now be achieved in about 13 to 18 years with reasonable market returns.

Dr. D also gains the advantage of tax diversification.  In his first 11 years, the only retirement savings was in his 401(k).  All of that would be taxed upon withdrawal.

Now, he’s got Roth money which will never be taxed again, and HSA money that will be treated the same if used for healthcare.  He’s got funds in a 457(b) that can be accessed if he opts for an early retirement, and a sizable taxable account that may not be taxed at all in retirement.  If he plays his cards right, he could potentially have many years of zero federal income tax in retirement.

Which Doctor are You?

In order to learn something from these posts, you should be able to compare yourself to these physicians.  Does your situation more closely mirror Dr. A, B, C, or D?  Or none of the above?  In what ways are you different?  How much do you spend in a year?  No idea?  Start keeping track or work backwards by subtracting your after-tax investments from your take-home pay.

How much do you invest in a year?  How much are you paying in taxes, and can you improve your tax situation?  The answers aren’t that difficult to come up with, but they do require some time and attention.  I’ve created a spreadsheet you can use to calculate your own savings rate here.

When you’re equipped with pertinent financial information, you’re better able to look at the big picture.  You can reflect on what’s most important to you and decide what you want your life to look like in 5, 10, or 20 years.  Your priorities and vision of your ideal life will evolve and change with time, and so will your plan.

I think and blog about an early retirement, but I can’t promise you I’ll follow through with it.  It sounds pretty sweet right now, but my priorities may be different 5 years from now, and I reserve the right to grab the rudder and change course.

Do you know someone like Dr. D who spends two-thirds of his salary, saving next to nil?  Apparently there are many Dr. Dahlgrens out there.  According to a Fidelity study, nearly half of physicians are saving less than 15% of their income, and 71% do not contribute to a non-qualified plan, such as a 457(b).  I find it worrisome to imagine such a large percentage of our physician workforce working past retirement age out of necessity.

How about you?  Do you know your savings rate?  Would you be able to make drastic changes like Dr. D if necessary?  Comment below!