April has been a busy month for the site. I had a couple of guest posts @ KevinMD and Fulfilled Physicians. Another post, Double Your Money with the Rule of 72, was featured by my friends @ Rockstar Finance. The Sunday Best was launched to share some other great sites and posts with the PoF community. I’ve continued to post two original posts per week.

According to Jetpack’s site stats, the site has had 11,512 visitors and 41,622 pageviews in a little under 4 months. 18,114 of those were in April, with about 11 hours left in the month as I type this up. The range was from 314 on April 2nd to 2,589 on April 15th (Thank you, Rockstar Finance!). Google Analytics reports 18,051, so they’re pretty much in agreement, which makes the numbers seem valid enough. On average, that’s about 600 per day. It’s amazing to know that my work is being viewed that many times a day, and exciting to watch the numbers grow.  After all, I am a numbers guy. 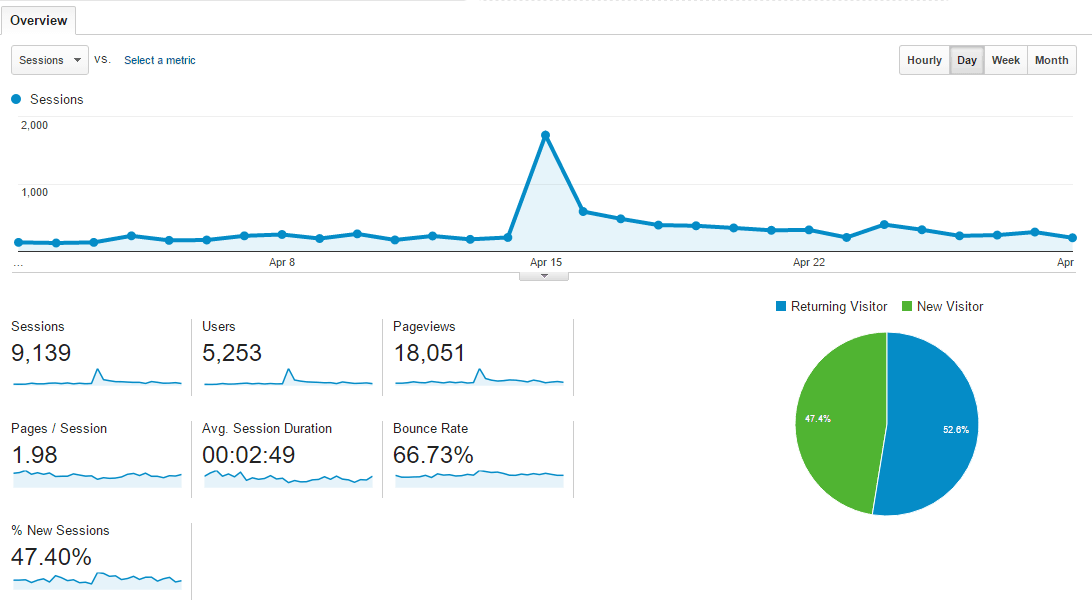 In May, I will be guest posting @ whitecoatinvestor.com and DrWiseMoney.com. Twice weekly posts will continue, and I’ll be heading west for a week late in the month for a conference / vacation, so I’d better get a few posts ahead by then.

Here’s a snippet from my first quarterly progress note, which goes out to e-mail subscribers:

As of Saturday, April 9th the site consists of a home page, 34 posts, and 8 pages. A few fun facts from the sites’ first 3 months.

Top 5 Posts to date:
The Make it a Treat post benefitted from being featured on Rockstar Finance, which led to the site receiving 2503 page views in one day, easily an all-time record for PoF. If you’d like to see another of my posts featured there, you can help me out by submitting it here. The Make it a Treat post was also used as the basis of a Lifehacker article, which was fun to see.
Top 5 Pages:
How are readers finding PhysicianOnFIRE.com?
A snapshot from Google Analytics shows that nearly a third come directly (from e-mails or typing in the URL). Google searches are the #2 source of readers. Many of the rest come from links on other sites.
Top 5 referring websites:
I’ve been welcomed graciously by others in the FIRE blogging community. Just yesterday, I was surprised to find a couple recent posts linked to from the more established bloggers and aspiring early retirees Tawcan and Steve from Think Save Retire.  Thanks, guys!