… and I don’t mean Dallas. I wouldn’t wish divorce on anyone, but it really breaks my heart to see it happen to the affable Dr. Benson. I don’t believe that all good things must come to an end, but I have heard that phrase somewhere, and sadly, it’s the case with Dr. B’s marriage.

We won’t get into the he-said, she-said or point any fingers. This is a personal finance blog first and foremost. The effects of divorce are far-reaching and affect all members of the family, but again, I’m here to show you the numbers.

So let’s talk numbers. Once again, we’ll assume 11 years has passed since our first look at the 4 physicians, and the more frugal Dr. A has already achieved financial independence.

4 Physicians Revisited: Dr. B & the Impact of Divorce

This isn’t going to be as straightforward as some of my previous puppeteering. Dr. B’s budget is going to look different after the divorce. And, with 2 kids and an ex stay-at-home wife, he’ll be making substantial alimony (spousal support) and child support payments. We’ll do our best to make some assumptions that might resemble his new reality. Here’s a hypothetical budget, before and after the divorce. We’re going to assume shared custody, Dr. B keeps the house, and he makes monthly payments of $4,000 each for alimony and child support, for a total monthly outlay of $8,000.

Many of Dr. B’s expenses are going to be about the same. He kept the house so he’s still paying the same for the mortgage, taxes, insurance, and home improvement. Living part of his life alone will save him some money on the food bills. He’s making one fewer car payment and spending less on family vacations. Some of these savings may go out the window if Dr. B starts dating again or gets remarried. But for now, we’ll assume his annual spending drops from $120,000 to $104,000, but the $96,000 in alimony and child support bring the annual budget up to $200,000. 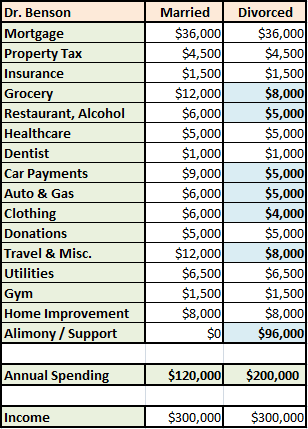 If you want to look for a silver lining, Dr. B’s alimony payments are tax deductible. Note that this will not be the case for divorces finalized in 2019 or later due to the Tax Cuts and Jobs Act.

Compared to our first revisit of Dr. B, where he upped his spending to $200,000, this Dr. B is in a more favorable tax position, despite having become a single filer. Child support payments are after-tax. Sorry, Dr. B, no break there.

The Verdict: Divorce Destroys His Path to FI

Well, this doesn’t look good for Dr. B. Not at all. I disclosed that Dr. B kept the house, but did I tell you that he had to give up two-thirds of his nest egg as a consequence? The divorced Dr. B sees his nest egg shrink from $1.5 million to $0.5 million in the blink of an eye. The support payments bring his savings rate down from over $9000 a month to just $3,000 a month. How does this affect Dr. B’s path to Financial Independence?

Dr. B was on track to afford an early retirement in six to nine years. After the divorce, he’ll have to work 5 times longer to achieve FI if his expenses remain constant throughout the years.

The truth is not that simple, of course. Child support payments won’t go on indefinitely. The alimony payments may very well be finite, too. On the other hand, unless Dr. B chooses to remain single forever, he can expect to see his budget increase somewhat if he remarries, and even more so if he starts a family with his 2nd (or 3rd… or 4th) wife.

Fortunately, I’m not intimately familiar with divorce. I don’t know how realistic any of the assumptions might be. Is $8,000 a month for spousal and child support too much or too little?  He kept the house and one-third of the nest egg. It’s never that simple in real life, obviously.

One thing I do know is that divorce can be an extraordinarily expensive endeavor. The cost in terms of money and years are just part of the story; the toll on the psyche, the children, and extended family are beyond the scope of this blog but are perhaps more substantial than the days and dollars lost.

Two simple keys to success often cited are “one house, one spouse“. I have broken the first rule, which may have added a year or two to my career, but have no intention of ever breaking the second. That would be devastating in so many ways beyond the obvious financial implications.

Does this exercise hit home for you or someone you know well? Or are you thinking, “Thank you, Dr. Obvious, for telling me that divorce sucks.”? I knew it was bad before running the numbers, but I would not have guessed it could quintuple your time to FI. I encourage you to share your thoughts below.

19 thoughts on “4 Physicians Revisited: Dr. B & the Impact of Divorce”