We last heard from Ether to FI in December when he talked about having a frugal spouse makes early FI all the more likely.

Today, he returns with his ninth installment more than a year and a half after he finished his anesthesia residency and introduced himself to the world.

The initial plan was to reach FI with $3.3 Million within 10 years but continue working indefinitely. A few posts back, he and his wife were thinking more seriously about the RE aspects of FIRE.

The goal posts have been moved once again, as you will see below. I think it’s a good idea to make plans and have goals, but the more specific your vision of the future is, the more likely it will change. The same is true the further out that vision is projected. 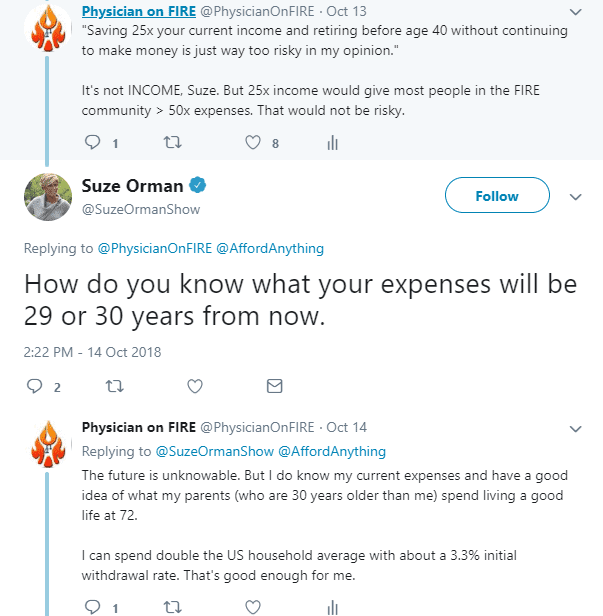 Learning from Those You Disagree With: Suze Orman and FIRE

What did I learn from Suze Orman? Initially, nothing.

Five months ago, Paula Pant interviewed Suze Orman on Afford Anything. The interview was one for the ages. Most notably, I had an anaphylactic reaction to Suze’s comments.

My symptoms were a mix of repulsion and rage with a side of nausea. In the New Year, I am trying to learn from those I disagree with. In this vein, I went back and listened to the interview.

The same symptoms occurred from my last exposure with a new sign of “you can’t be serious,” but I powered through. These are the things I learned, and this is how it’s affecting my financial plans.

Your money needs to last till age 100 / Taking care of aging parents.

I agree with this sentiment. Those of us planning on quitting the nine to five, or in our case the six till done, still have a long life ahead of us. Continued innovations in technology mean age 100 might be the new 50.

Our money needs to last through financial turbulence, new taxes, and your great-great grandchildren’s new business idea. There are a lot of things we cannot foresee, even with the best-laid plans. No one will cry about having more money, so I plan on saving a little extra before I stop working full time.

The E.T.F. household has decided to change our FIRE number from $3.3 million to $4.95 million. Some might question the drastic jump, but I have been thinking more deeply about helping to take care of my parents, and in-laws.

They are not getting any younger, they might also live to 100, and they have not planned for this outcome. We expect to help them when they no longer can help themselves. Hopefully, this is decades in the future.

We have “increased” our yearly spending projections to $150,000 as a buffer for this inevitable spending. We are not planning on spending $30,000 a month on our parents care like our friend Suze. The cushion is to help supplement their retirement plans without straining our own.

You need tens of millions at age 80.

Suze’s concept of the FIRE movement has many flaws, but this was a glaring one. It is the people in the FIRE movement who are best positioned to achieve the deca-millionaire status she believes everyone must reach. If you save a few million dollars early in your life, compound interest will make you a multimillionaire many times over without any additional work.

I see nothing wrong with having a lot of money in your old age, but you do not “need” it. Most people reading this blog can comfortably take care of their needs after a few years of diligent saving. $50-60,000 of our $100,000 projected spending in retirement is “wants.”

If you subscribe to a Mustachian philosophy, our $5 million FIRE number is overkill. I like the big buffer because I always know I can scale back drastically when the economy falters.

My mindset is to work hard and enjoy life. Maximizing my income and net worth during my working life is motivating for me. We will keep saving aggressively and try to save a few million dollars as quick as possible.

This is not a political statement; taxes are going to go up. Enjoy the tax holiday while you can. I believe that people chasing FI and not necessarily FIRE should take advantage of Roth opportunities now because these are going to look like discounted rates in the future.

Something is comforting about knowing that there is a portion of my money which has already paid its dues and cannot face likely future tax hikes. If I am wrong, and taxes go in the opposite direction, I have half of my portfolio in pre-tax buckets.

The government could change their mind in the future and decide to tax Roth accounts so my plan could fail, regardless. Based on the information we have today, I think a balance including Roth accounts is appropriate for the ETF family. Since I am not planning on retiring until I approach 50, I still have many years of work ahead of me.

I still have not found what I would necessarily retire to. Travel and lounging would be great for six months, but I would get bored. This thought was the best part of Suze’s message.

Retirement sounds good, but we gain a lot of structure from our jobs. Those of us who are physicians might not realize how strongly we identify with our occupation. After all the training and sleepless nights, it’s not just what you do, it is who you are.

Before I pull the plug on work, I want to identify with something else. Professional lounger does not have the same intrigue when you do it day in and day out. I am going to spend the rest of my career trying to find what I want to retire to.

I might see I still like what I am doing, and just keep on my current path.

Live below your means but within your needs.

This basically summarizes the financial independence path. Suze uttered this statement but somehow did not like the FIRE movement. Well, maybe when she learns a bit more about us, she will realize we are just regular people who have discovered a different path. Passionate about giving ourselves the option to have extraordinary lives.

What do I think about the FIRE movement?

The Most Valuable Player for FIRE for 2018 goes to… Paula Pant!

You are fantastic at baseline. I am now convinced you are a saint. How were you able to get through this interview without reacting poorly? You are a much better person than me.

Bumping steadily along, soon we will be able to say we are half-millionaires. I am guessing that is not a thing, but I will be celebrating nonetheless. I feel like this is the part no one gets to see, just making steady progress month to month.

When I go back and look at where we started at the end of residency, we have increased our net worth six times over. However, looking at last month, it feels like we are jogging in place. Well, I am going to continue jogging, and I will see you guys in a few months. 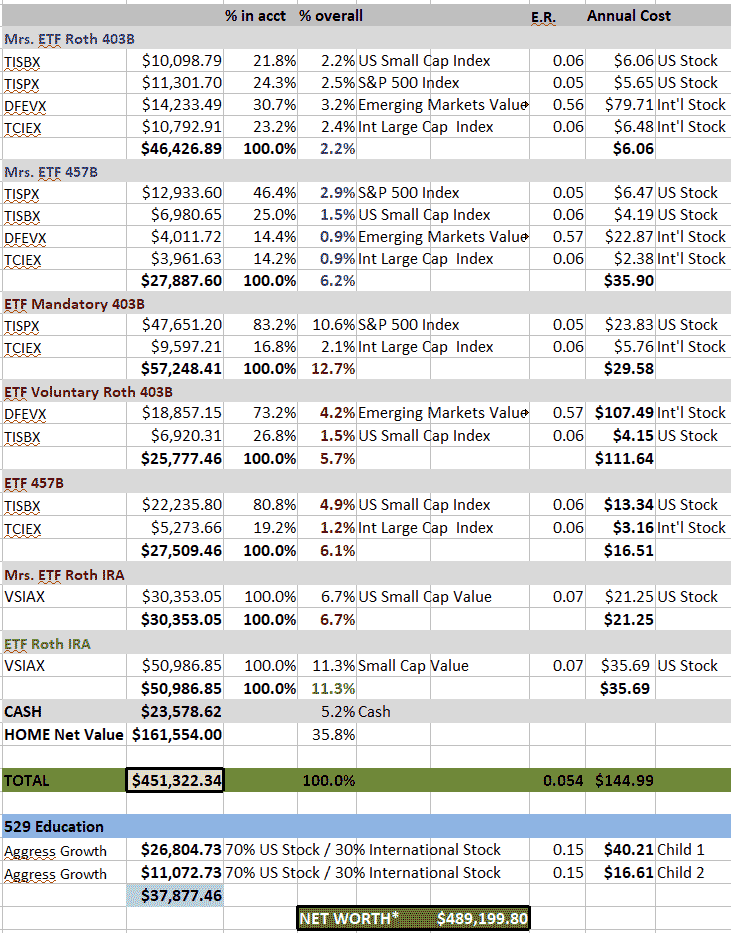 [PoF: Would you look at that? A half-a-million bucks is just a few good days away!

I like E.T.F.’s take on the Suze Orman fiasco. A lot of the details were wrong and her delivery made her sound incredibly self-absorbed, but there were some takeaway points that should not be ignored completely.

I continue to be impressed by the net worth gains by this young family as they continue to jog along on their FI journey.

As far as moving the goal posts, I think it’s reasonable. Knowing what I know about the E.T.F. family, I think $3.3 Million would be plenty for them to retire today. But they’re still $2.8 Million away from that initial goal, and by the time they reach it, $3.3 Million won’t have the same purchasing power that it does today.

When they do eventually reach that $5 Million dollar mark in maybe 12 to 14 years, inflation will likely make it pretty similar in value to $3.3 Million in today’s dollars.

I wish them success in reaching those lofty goals and enjoying the ride while they live below their means and within their needs.]

Are you able to learn from those with whom you disagree? Are you as impressed as I am by the E.T.F. family’s steady progress towards financial independence? Sound off below!