“Hello FIRE nation.  I am E.T.F.  You are probably wondering what happened to the missing “RE” in my name.  That was not an accident.  I will probably have many different occupations in my life, but I am on a mission to find work that I love. Charlie Munger working at 93 is my inspiration.”  -Ether to FI

It seems he may be having a change of heart. Interesting what the influence of a better half can do.

I try not to plan my life more than five years ahead. Beyond that, anyone’s guess is as good as mine as to what I’ll be doing and where I’ll be doing it. If you had told me five years ago, I’d have a side gig running an early retirement blog, I would have said “you’ve got the wrong guy.”

In a fun side note related to the quote above, I recently spent the night walking the same paths that Mr. Munger has walked for decades on Star Island. He was up at the time, but sadly, the 94-year old investing legend didn’t walk the same paths at the same time as me.

Ether to FI, the floor is yours.

Ether to FI: Shifting Emphasis from the “FI” to the “RE” and a Net Worth Update

I don’t know if this post will help anyone but myself. This is an ask the audience for advice post. A significant change is coming in the Ether to FI (E.T.F.) household.

The original title of this post was “Verbal Diarrhea” because once I started writing this post, the words just spilled out.  G.I. might have been my true calling.

Mrs. E.T.F. has caught the FIRE bug. Yes, with an emphasis on “Retire Early.” She came home and said, “we need to get out of the rat race.” I almost called Will Smith and Tommy Lee Jones, because I was sure an alien was inhabiting my wife’s body.

I have previously cajoled, begged and pleaded with varying degrees of success, but something has lit a match. Could it be her starring role as a guest poster? I don’t know, and frankly, don’t care because my wife is now on my exact same wavelength when it comes to finances.

She is listening to Choose FI like it’s a Top 25 radio station. [PoF: It’s not?!?] She is asking questions. She is scheduling net worth update meetings. We might reach our goal by next year at this pace.

Has this ever happened to anyone else’s significant other?  Please respond in the comments. Did I mention that I could not be happier? This is like waking up during the blizzard of ’96 and realizing school will be canceled for weeks. I just hope it continues.

In other news, we are planning on buying a house. I will gladly listen to any advice on this topic because it almost feels like we are walking into a trap. You might think I am being dramatic, but interest paid to a bank on a lot of money is a lot of money. A lot is relative based on your neck of the woods, but six figures are “mucho dinero” to us.

We have been debt free since 2014, so I might just be dreading going back into debt. I don’t buy into the good debt myth; the Dave Ramsey part of my brain is screaming “all debt is bad.” This theory is running smack dab into reality.

If we are patient, I know five years from now we can buy a home in cash. Let’s just say patience is pretty low at this point. We will have enough for a 20% down payment in a few months. As soon as we reach that milestone, I think we can buy and pay off the house within five years, which will still keep us within the timeline to be FI in under ten years.

You might ask, what is the problem with that plan? On the surface, nothing. We are making a conservative purchase around 1-1.5X of our income, with a quick payoff plan. The issue is you are talking to frugal (E.T.F.) and frugalista of the century (Mrs. E.T.F.). Paying a few hundred thousand dollars to buy anything is not our idea of a good time.

Why Not Rent Instead?

Renting for the past 12 years has had positives and negatives. The positives have been having things fixed whenever they break by someone else. Having access to grills and pools that someone else maintains. The flexibility to move easily from one location to another.

The negatives — currently we have neighbors who make noise literally every night. It sounds like they are doing wind sprints.

We live below these guys.

Another negative is the limited sense of community in apartments. Everyone is in transition, so it seems everyone keeps to themselves.  We have also rented a house in the past. I will spare you the details, but that experience was a disaster, and the place was not cheap.  The extra expenses while paying off someone else’s investment property left a sour taste.

Specific to us, the community we currently live in is not where we want to live long term. Our oldest is starting school soon, which is primarily driving the move.

We don’t live near either of our families, so establishing roots has taken on new significance after having children. Roots = buying a house in a decent neighborhood + near an elementary school + near a park + joining the neighborhood association + the white picket fence + the 2.5 kids + the obligatory pet.

The list I once made fun of in my twenties is precisely what I want in my thirties.

The question I am asking myself is how much is too much?

We are a family of 4, so based on conventional wisdom, we need at least 4000 square feet, a pool, 1 acre of land and a 4-car garage (the sarcasm is free).

We have made some steady progress over the last few months.  We are also in the process of simplifying Mrs. E.T.F.’s holdings and consolidating them through one provider. Next post will primarily focus on net worth and goals for the next full year.  Ten months into the process, I am proud that we have stayed on track.

PoF, we are coming for you! 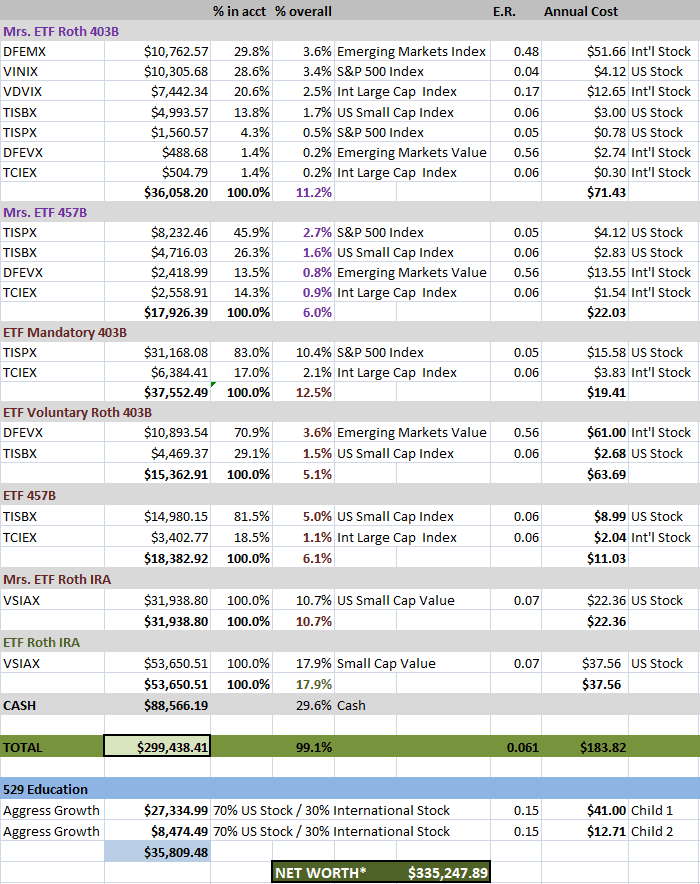 [PoF: You’ve made “some steady progress”? Is that what you call over $100,000 in two months? Dang! You’re crushing it. The cash bucket alone has grown by $55,000. Keep up the great work, good luck with the house search, and I look forward to the next inspiring update!]

E.T.F.: I am reaching out to you guys, what mistakes did you make with your first housing purchases?  What would you have done differently? Any advice will be helpful.  Please leave it in the comments.

42 thoughts on “Ether to FI: Shifting Focus from the “FI” to the “RE” and a Net Worth Update”