Guess who officially has their first million dollars? None other than Ether to FI, our periodic anonymous anesthesiologist and guest author. Congratulations are in order!

I don’t know the precise date when we had our first million, but I believe it was six or seven years after I finished residency. In other words, it took me at least twice as long to accumulate a nest egg of that size.

At the risk of sounding like an old fuddy-duddy, I’m going to say that back in my day, there were no physician personal finance blogs, and the terms “financial independence” and “FIRE” were either obscure or non-existent. People certainly weren’t writing about it, talking about it, or chasing it like they are today!

I’m delighted that today’s physicians now have a better roadmap and that doctors like E.T.F. are traveling that road and sharing their highs and lows as they pass the waypoints. Today’s post represents a high and I wish the good doctor success in reaching his next million in short order. While it’s true that the late October downturn may have brought their net worth back below $1 Million, that’s what one should expect when invested in stocks, and that would give them another opportunity to pass the milestone yet again! 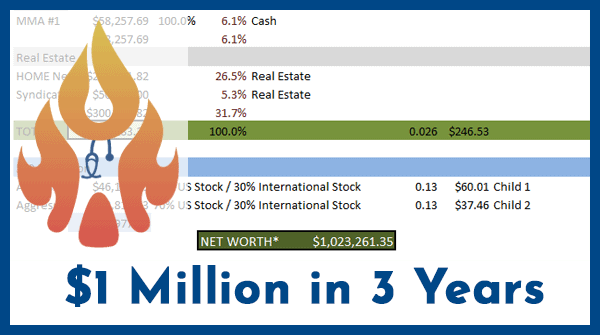 Ether to FI: 3 Years to the First Million & a Net Worth Update

Three years and one month, to be exact.

How does it feel to have a $1 Million net-worth?

It is both exciting and anti-climactic. I was updating the net-worth spreadsheet and glanced down at the balance, and there it was—the mythical $1 million. As a little kid, I thought about all the things I would buy when I was worth a million dollars. Well, tiny E.T.F., a million dollars, is not what it used to be. A million dollars in the decade I was born, the 1980s, would be $3,158,737.86 in 2020.

When the spreadsheet ticked past our first million dollars, there were no fireworks, and we still had to go to work.  My first thought, after a small fist pump, was how long it would take reach $2 million. Then, I thought about other stages in life, especially my medical training, where I checked the box and moved on to the next task.

I completed high school and was already looking ahead to college. After college there was no celebration, just medical school to conquer next. Medical school was finished, but the job was not complete; residency loomed on the horizon. I completed residency, finally became an attending and began thinking of the money to be made and the next steps for career advancement. The Type A personality treadmill was on overdrive.

However, once I realized I reached my first million,  I caught myself, stopped, and savored the moment. We have achieved a massive milestone as a family. It will be one of many steps, but it is an important one. We have reached the mythical number and it feels good. Reality has finally converged with our theories of being financially responsible.

She breathed a huge sigh of relief and became emotional. She usually does not react to our net-worth status. Even for her, I think it represented a milestone. I can imagine her thinking, “listening to my husband and his finance crusade worked,” and there is now a tangible result.

If you have read my other posts, you know that I always brag about my wife. Our current financial position would have been impossible without her. She has read every personal finance book I have ever given her. She has been the best teammate. Her willingness to go along with a plan from a broke medical student up to his eyeballs in debt is the real reason that we are here.

How did we get here?

Over the last three years, we have shared our path – it is basic and boring without any gimmicks. We did not use any special tricks. We asked ourselves a couple of questions when we started. How much of our income are we willing to save, and can we ignore the rollercoaster that is the stock market?

I am amazed by how many new attending physicians can no longer maintain a resident’s lifestyle. During residency, the car and an apartment were acceptable. After a salary increase, the same person deems that these items no longer fit their new and improved status. Lifestyle inflation after a long training period is deserved, but I think people take it overboard.

As a physician anesthesiologist, if you spend twice your resident income after you become an attending, you have made a 100% improvement in your lifestyle. The difference between your new income and doubling your resident income leaves a lot of room for savings. Rapid net-worth growth becomes automatic.

The best advice I ever received on building wealth was to pick my “one thing.” My “one thing” is travel. I do not have the biggest house or the nicest car, but I like to explore the world (when there is not a global pandemic). I spend lavishly on travel, but not much else.

It makes me happy, and we are still able to achieve our financial goals. Reigning in lifestyle inflation and choosing a “one thing” is how we got here. Low-cost index funds are great, but the gap between what you make and what you spend makes all the difference.

Mrs. ETF often teases me that once I find something I like, I usually stick to it and have little desire to try anything else.  My quip back is that I have discovered the secret recipe for a long and happy marriage. This character trait has been helpful in terms of investing.

We developed a plan, chose our index funds, and continued to invest. The only time I review investments is once every few months when I write these articles. I do not watch the news and do not track the trajectory of the stock market.

There is an advantage to this approach when you are investing for the long term. We just put money in the market and let it ride. Ignoring the stock market is another key to how we got here.

When I compare our original spreadsheet to our most recent spreadsheet, there are definitely more lines. However, the general theme is the same – keep it simple and limit costs. 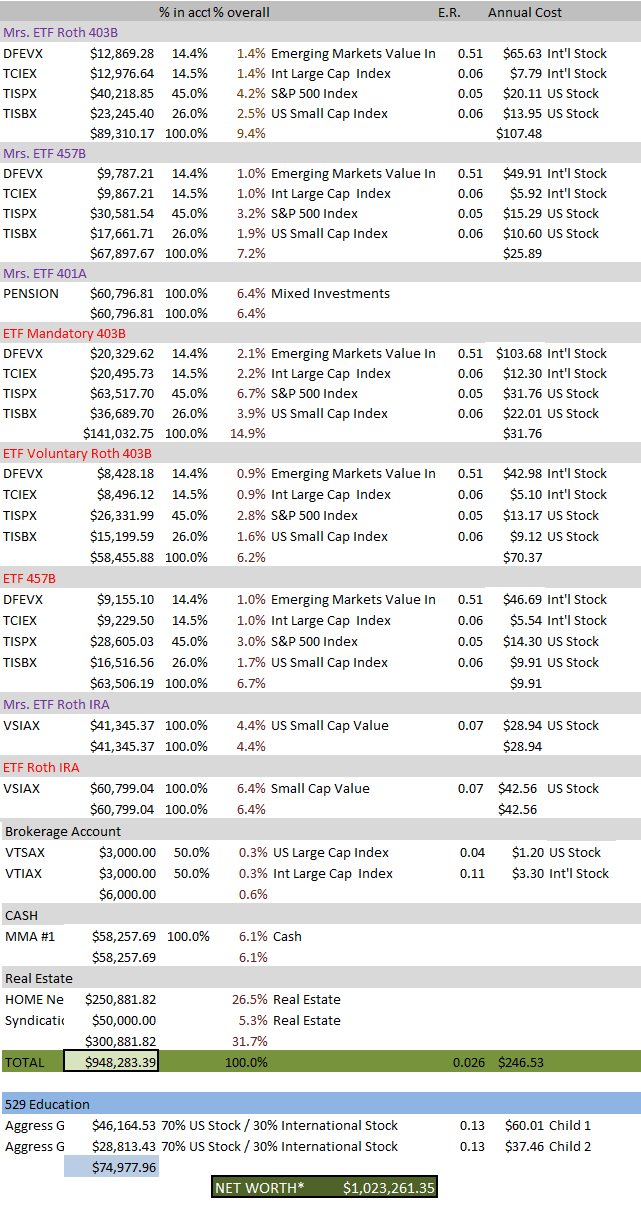 There are a couple of new additions to this net-worth update. We recently began investing in real estate and made our first contributions to a brokerage account. These two areas will receive more attention as we move forward as we would like to have investments that fund daily living before the age of 60.

After exploring active real estate investing, it became clear that being a limited partner in syndications is the best approach for us right now. I would still like to manage property in the future, but now is not the time.

We invested $50k in a real estate equity fund this year and plan to increase our contributions next year into another fund or a syndicated property. The cash flow generated through this style of investing is very appealing to us.  In ten years, quarterly payments from a group of funds could be enough to fund our cost of living without touching any of our stock market investments.

Our net worth has crested over the $1 million target.

Reaching $2 million in two years is the next goal. Stay tuned and keep us on track.

Have you reached your first million yet? If yes, do you recall when it happened? How did you celebrate?

27 thoughts on “Ether to FI: 3 Years to the First Million & a Net Worth Update”