It’s been three years since Ether to FI started his job as an anesthesiologist, and it’s been a year since I left mine. While I’ve been treading water, E.T.F. has been making waves.

In his last update, which was written in late March of 2020 (i.e. near what we can now call the bottom of the brief stock market crash), he reminded us to “embrace the dip” and “stay the course.”

Our boring plan will just keep moving forward. Embrace the dip, everyone.  Stay safe, and wash your hands.  See you in a few months. -Ether to FI

Sage advice from a young doc, and his wisdom is one of several reasons he’s closing in on millionaire status so early in his career. I believe it took me about twice as long in my career to be able to say the same.

Below, he asks and answers a number of important questions as he rounds the bases, beginning year four of his career as an anesthesiologist. Coincidentally, The Physician Philosopher is at the same point in his anesthesia career, and he also published a recent net worth update.

Ether to FI: Time Waits for No One

Time waits for no one. Three years have disappeared very quickly. The fourth year begins in the middle of August, and it is crazy to see what has transpired over these three years. I knew we would have made some progress, but I am proud of our consistency. 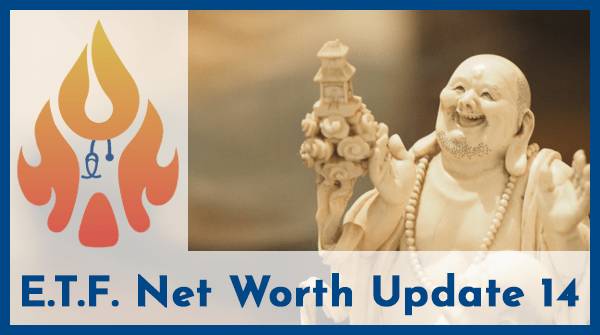 Are you happy with your current position?

Many people switch jobs in the first few years of their careers. Three years later, I am pleased with my employer and my current position. Sacrificing for financial independence is sometimes sold on the premise that you can finally quit that job you hate and never have to work again.

Luckily, I have a job I enjoy and will likely keep after we surpass our FI number. Reflecting on this journey, I come back to the same principle, “choice.”

There are some hard days when sleeping in, and not having to work overnight seems like a no-brainer. On balance, I can say I would have made the same choice in choosing medicine and the specialty of anesthesiology, and my current job.

What will change in the future?

Marching forward, and thinking about the future, these are the things that I would change about my current job. Nightshift would be the first thing eliminated in my future FI lifestyle. Studies show nightshift harms your health. Not only do I work nights, but I also work 24-hour shifts.

Working at night is very much part of the job of many anesthesiologists, but limiting those shifts is my primary goal. It is possible to have a daytime lifestyle working in surgery centers, but I prefer the case mix at larger hospitals. I will have to work through this decision tree in the future.

The average worker in the U.S. has 15 days of paid vacation a year. Three weeks of vacation in a calendar year. Those with 20 years of experience gain an additional week. I cannot imagine four non-consecutive weeks of vacation a year is much of a reward for 20 years of work. There are countries with 35 days off in a calendar year. That is better, but not quite in FI dreamland.

The dream is to be able to travel three to six months a year. Imagine how long your career could be if you had that amount of time off a year. When we are financially free, I want to create a lifestyle of work for a few months, followed by a few months off and then rinse and repeat. The thought of that practice structure when I am older is quite appealing.

Where did this journey begin?

Let me remind everyone where we started in the middle of August 2017. Our net-worth was $80,283. Our goal was to achieve financial freedom, defined as $3.3M by mid-August 2027. $3.3M would allow withdrawals of $100k a year at a 3% safe withdrawal rate. The plan was not to retire at the ten-year mark but to reach financial freedom to grant us the freedom to choose how much we work and the manner that we work.

“The first million is the hardest to earn,” is a phrase commonly uttered. The effects of compound interest speed up how quickly you can make your second million. I anticipated it would take us around four years to have a net worth of one million dollars.

I predicted around year six and a half to make the second million. Between year eight and a half and nine to make the third million. Then we would have one year to make the final $300K before we hit the ten-year mark, which was the timeline for the initial goal.

Are you on pace?

We are ahead of schedule. Our “initial” goal will be accomplished about one year early. $3.3M was our first FI number, but we increased it to $4.5M. The reasons were explained in this previous post.

We are going to maintain the $3.3M marker as the tracking goal for the 10-year mark in our quest to achieve FI in 10 years. A net worth of $3.3M at ten years would allow us to reach $4.5M within four years without saving more money.  We will likely get to $4.5M before the 14th year as an attending because we will keep saving at our current rate.

I think we will have a million dollars in net worth by the end of 2020. COVID-19 has done a pretty thorough job of creating havoc this year. In our household, we will have this shining light.

Our overall structure, as far as investing, has not changed since we started this series. We are invested in 100% equities. We invest 75% of our investment portfolio in U.S. equities and 25% in international equities.

Half of our U.S. equities are large-cap, and half are small-cap.  The international component has 72% invested in developed markets and 28% in emerging markets. We are currently building our cash component to buy real estate. I will cover this in another post in a few months.

What’s our current net worth?

Not bad for three years of work.

Just kidding, I am ecstatic! We are making progress. 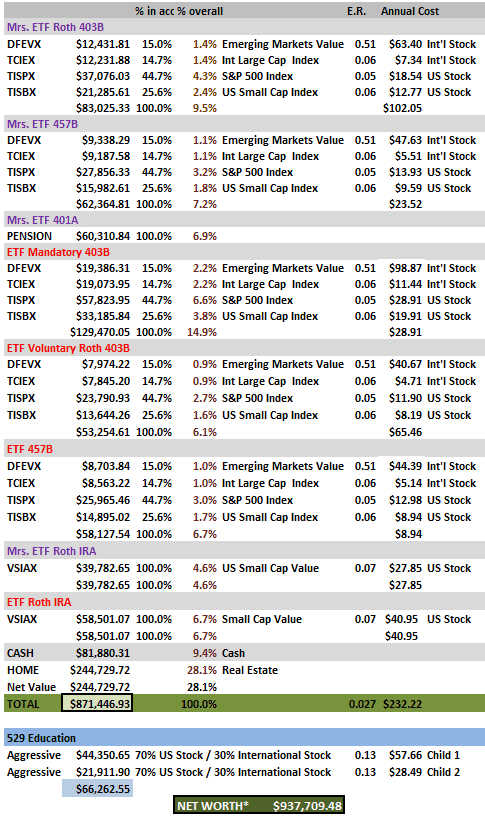 There is a level of inevitability to investing – if you keep contributing, your nest egg will grow. The tough parts are continuing to put the money in while ignoring the news, your colleague’s hot stock tip, and CNBC. Just one dollar after another, systematically sticking to the plan.

Nothing is exciting about our overall strategy. It is about as interesting as watching paint dry. It works because we have stuck to it.

Thanks for the continued support, and thanks for motivating us to continue chasing FI.

The big money is not in the buying and the selling, but in the waiting.  -Charlie Munger

What do you think of the progress E.T.F. and his family have made? Would you be able to stick to a 100% stock portfolio in times like these?

13 thoughts on “Ether to FI: Time Waits for No One & a Net Worth Update”