Today, Ether to FI checks in with another of his bimonthly updates. Despite some unpleasantness in the markets, his family’s net worth continues to climb, as they’re now worth more than five times what they were when we first met them when he was fresh out of residency in July of 2017, an increase of nearly $400,000 in 17 months.

At this pace, his goal of $3.3 Million in ten years looks like it’s only a matter of time.

One of the Aces up his sleeve is something we have in common — a spouse that doesn’t like to waste money any more than he does.

It’s important to be on the same page as a partner when it comes to money matters, and when that page is titled “Frugality” while paired with a high income, wealth is sure to follow.

When my wife goes shopping, she doesn’t come to boast about all the really nice things she brought home. No, she brags about how little she spent and how amazing the deals were. It’s a lovely quality, and one that we share. When you’re married, money is not a single player game. Just be sure you’re on the same team like Mr. & Mrs. E.T.F.

The ultimate financial independence (FI) superpower is a frugal spouse. I have one, and you should get one as soon as possible. This secret was revealed a long time ago. In Tom Stanley’s Millionaire Next Door, he let the cat out of the bag. The first time I read the book, I thought used cars and small homes were the secret to wealth. Those are minor compared to who you choose to marry.

On the financial independence spectrum between make more or spend less, I lean towards the make more camp. Income from a W2 job is tied to the hours of your life you are willing to sacrifice in the pursuit of more money. The trade your time for money treadmill only goes so fast. Eventually, you run out of hours in the day and ultimately have to reduce spending.

If you have the misfortune of a spouse who has never seen an Amazon box they didn’t like and is on a first name basis with every cashier at the department store, I genuinely feel sorry for you. You cannot bring money into the front door of your house faster than a determined spendthrift can throw it out of the window.

In his book The Millionaire Mind, Thomas Stanley has a chapter called Choice of Spouse, which should be required reading for single people. Married people should probably read it too, as it might help us all behave better in the arena of relationships and money.

The Frugality of Mrs. Ether to FI

Back to the heroine of this story, Mrs. Ether to FI.  I have a lot of examples of her frugal tendencies which have helped save me from myself. The latest highlights her superpowers quite clearly.

Mrs. ETF’s nine-year-old car had a severe case of arthritis. It was beginning to creak and groan with every turn of the wheel.  You could feel every bump in the road. Most annoyingly, it was going to the doctor’s office (aka mechanic) every couple of weeks.

It looked like it was time to start planning the funeral. The mechanic was finally able to present the chief complaint, and for a small fee of $1500, he thought he could fix the problem.   told him it was time to upgrade, so he should hold off on the repairs.

He said he would be willing to buy the car when we purchased our updated 3 – 4-year-old replacement, because of its excellent maintenance record (he has been doing all the maintenance since we bought it used four years ago).

I immediately started shopping for a 3-5-year-old Honda or Toyota replacement for our current car since they are both reliable car brands that hold their value.  I estimated it would cost between $20,000 – $25,000 to get the used SUV I wanted.  We could make the purchase in cash without touching our emergency fund.

I soon plugged it into an investment calculator, which showed $23,500 invested at 8% over 30 years is $236,500, without adding another cent. The mechanic received his $1,500, the arthritis was treated. The car has some more years left, and our net worth will continue its upward trajectory. Frugal spouse for the win!

Home Net Value: Appraised value – mortgage, this little formula makes my spreadsheet look nicer.  By the way, we bought a house.  I will write about the home buying process in a future post.

Our net worth is bumping along.  I had to adjust a lot of numbers down this month for our various investments. Could this be the rumblings of a recession on the horizon?  My magic eight ball is broken, so the plan is the same as always.  Buy, buy, buy.

Hopefully, we are headed down, so each dollar is grabbing a larger piece of Mr. Market.  We made a decent size jump in our net worth in the last two months.  It was a combination of buying an undervalued house and topping off retirement accounts at the end of the year. 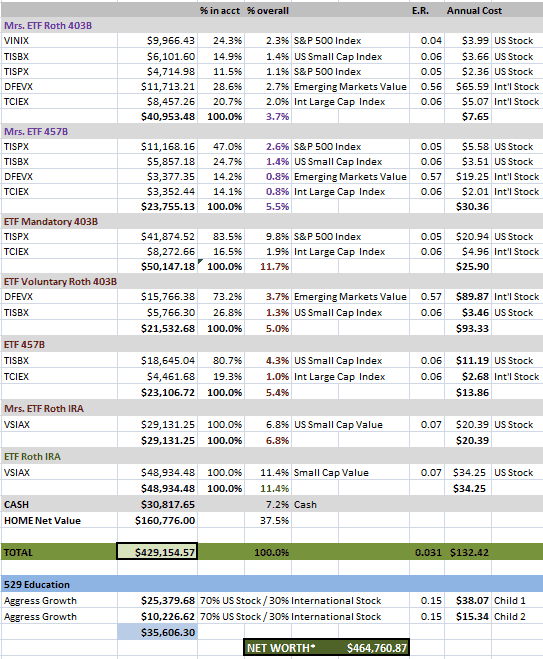 Is anyone else excited that retirement account contributions are going up next year?  $6,000 for IRA’s and $19,000 for your 401k.  I was excitedly telling everyone at work and soon realized I had to keep the holiday cheer to myself.  The general consensus was it was already too high to reach.

I could only shake my head.

It seems there are just a few of us in the FI bubble.  I keep thinking the secret is out, and everyone will stop working, and leave all the tasks to the robots.  I am sadly mistaken.

Happy holidays to everyone, see you in 2019!

That’s a good illustration of how little the market affects your net worth when new additions account for most of the fluctuation.

Conversely, we see how little new contributions affect my own net worth. We’re more at the mercy of the market. As I learned in my $10 Million Dream article, our future net worth (and potential path to $10 Million) depends less on me working and more on the market treating us well.

Lately, the market hasn’t treated us so well, but a correction has felt overdue for some time. If this drop evolves into the first bear market in ten years, I won’t shed any tears. It is bound to happen eventually, and I’d rather see the market drop and rebound while I’m still earning money and before we implement our retirement drawdown strategy.]

Do you have a frugal spouse aiding your financial wellness? Or is it the opposite? Give us an example in the comments!

13 thoughts on “Ether to FI: Frugal Spouses: The FI Superpower & a Net Worth Update”