Most of my writing is directed at physician households, and most (attending) full-time physician households have solid six-figure salaries. In a well-compensated specialty or with a dual income, it’s not unusual for a household to have income of $500,000 or more.

However, not all of my readers are in that position. Some are students or residents. A resident couple will make $100,000 to $120,000. A PA or NP may have a similar salary, as will many different combinations of individual or dual income households.

Today’s post was inspired by a reader who has a low six-figure household income. Six figures, yes, but nowhere near the $300,000 salaries of the doctors in our 4 Physicians series. He is married with children, and has heard conflicting opinions on how best to invest in his retirement accounts. Let’s help him with some answers.

To Roth or Not to Roth. That Is the Question.

This question comes up a lot, and frankly, I don’t spend too much time thinking about it, because for me or someone in a similar position, the answer is obvious.

Living and working in the upper tax brackets, it makes good sense for me to defer as much tax as possible by investing in a traditional, tax-deferred manner. I deduct and save more than 40% in taxes on every invested dollar, and I plan to withdraw or convert those dollars to Roth in a lower tax bracket in early retirement. The only Roth investments I make are “backdoor Roth IRA contributions” in lieu of $11,000 in what would otherwise be investments to our taxable account.

If I can take a deduction in the 33%, 35%, or 39.6% federal tax bracket (and a high state income tax), and later withdraw or convert in the 15%, 25%, or even 28% bracket, the math favors traditional, tax-deferred investments. I defer every penny possible.

However, a family with a low six-figure income may be facing a different situation. In fact, after exemptions and deductions, this family may be able to drop out of the 25% federal tax bracket and into the 15% tax bracket. Here are the brackets for 2019. 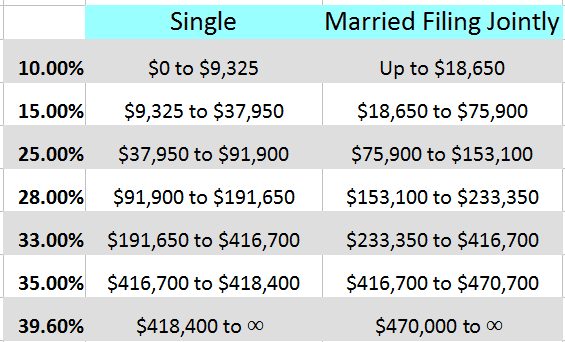 Roth or Traditional Contributions in the 15% or 25% Tax Bracket

As Michael Kitces (and dozens of others) have accurately pointed out, the most important determinant in making this decision is comparing your current and future (in retirement) marginal tax brackets.

To determine which will be the case for you requires some combination of knowledge and guesswork.

We can (and should) know our current marginal tax bracket. We can make an educated guess as to whether it will be the same or higher in retirement. For a potential early retiree, there is an excellent chance it will be lower in retirement. Why? Simply because there are fewer years to build up the balances and more years in which to spread out conversions and withdrawals between retirement and required minimum distributions at age 70 1/2.

The least predictable factor is what tax brackets will look like at retirement age. The further away that is, the more time there is for drastic change. Will we have a graduated taxation scheme, eliminating brackets altogether? Or a flat tax? Higher taxation across the brackets that resemble what we have today? Or lower?

While we don’t know the future, we can make a best guess. In the case of today’s subject, let’s say he currently has a gross income of $120,000. Let’s give him a wife and two kids. (actually, he’s already found / made his own). Currently 30 years old, living on about half his take-home pay to make FIRE a realistic possibility with current spending in the $40,000 a year range, he expects to work at least another decade or two.

Will His Future Tax Bracket Be Higher Or Lower?

Plugging these assumptions into the TurboTax Taxcaster, deducting a rounded up $7,000 for HSA contributions, $12,600 standard deduction, and $16,200 in exemptions, we arrive at a taxable income of $84,200, and a marginal tax rate of 25% for a total federal income tax of $10,700. Making maximum Roth contributions to his available retirements will not alter the tax picture.

If he makes traditional rather than Roth contributions of $12,500 (the max for SIMPLE IRA) and $11,000 into an individual and spousal IRA, he reduces his taxable income by $23,500, with about 1/3 of his tax deferral coming in the 25% tax bracket, and the rest from the 15% tax bracket. The transition occurs once taxable income drops below $75,900.

Alright, that’s just way too many numbers in paragraph form. This post is in desperate need of a spreadsheet. Let’s do that. 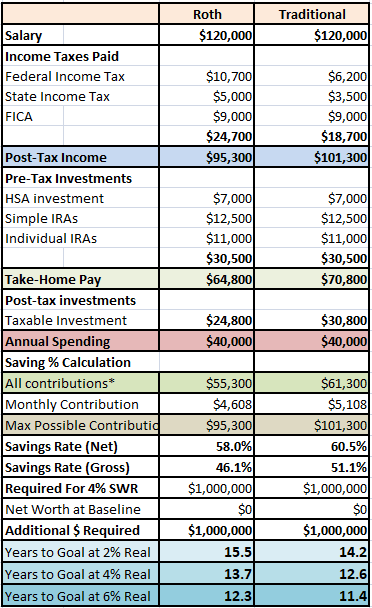 Assuming our subject has a net worth of zero at age 30, having assets equal to his student loan balance, he can expect to have the equivalent of $1 million dollars in today spending money in 11 to 15 years with returns in the range of 2% to 6% real.

The net worth calculation favors tax-deferred investments into the IRA. Of course, it does. The extra money from the tax deduction is put into the taxable account and the million dollar goal is reached about a year earlier.

Do we have our answer? Not necessarily.

The Role of Roth Conversions

If our friend chose to make only traditional contributions, he would end up with about $500,000 in the IRAs and $500,000 in a taxable account. We’re assuming he has invested in a tax-efficient manner, buying passive index funds to minimize tax drag.

In early retirement, our friend still has kids at home — that means he continues to have close to $30,000 from the standard deduction and exemptions, along with $2,000 in child tax credits.

Plugging numbers into Taxcaster once again, we find that he can report a full $40,000 in income per year to meet his family’s needs tax-free*. In fact, assuming his taxable account is invested in a tax-efficient manner, delivering about $10,000 in qualified dividends, he can withdraw closer to $50,000 before income tax is owed.

*Ahhh… but he can’t touch that IRA until age 59.5, you might be thinking. It’s true that he cannot withdraw the funds without a 10% penalty. But there’s no age (or income) limit on Roth conversions.

Our friend could live completely off the taxable account in the initial five years of early retirement, taking some long-term capital gains and still converting about $40,000 a year of the traditional IRA contributions to Roth contributions tax-free. After 5 years, the converted money can be accessed penalty free. Make annual conversions in this manner, while living off the taxable account, and you’ve set yourself up with a Roth conversion ladder.

Related: Should You Invest in a Roth or Traditional 401(k)?

We Have a Winner!

Like me, our aspiring early retiree friend should be making traditional, tax deferred contributions to his IRAs.

Stephen King claims to start a novel with a setting and a few characters with little idea where the story will take them. I tend to go into an exercise like this in a similar fashion. To be honest, I was hesitant to even write this post because a) I figured it would pretty much be a wash and b) the topic has been discussed exhaustively.

But lo and behold, it seems clear that in the case of my FIRE-minded friend, there is a clear winner. If he and his family continue to live happily ever after on $40,000 a year in today’s dollars, they will be in great shape to save money in a tax-deferred manner and access it essentially tax free as early retirees.

Yeah, But What About?

Yes, there are many unknowns in his future. And yours. And mine. He may need a bit more money in the future. Maybe a lot more. To keep it somewhat simple, I haven’t addressed every possible cost that may rise or fall with the political tides.

To be honest, every assumption we made regarding future taxation is made based on current tax code, and the odds of no drastic changes in the next ten to fifteen years is slim. We simply do the best we can with the information we have today.

If it turns out he needs 50% more money than we calculated, he’ll adapt to the new nest egg goal and work either harder, smarter, or longer. Based on the numbers we used in the spreadsheet, an additional $500,000 would require an additional 5 years in the workforce. He’s still financially independent by 50.

Are you convinced? Should our friend eschew Roth contributions in favor of traditional tax-deferred IRA contributions? In what situation would you advocate the Roth route? Sound off below!

50 thoughts on “Case Report: Roth or Traditional Contributions for a Low Six-Figure Household”