This is a timely post given some recent fear-mongering about mudslides, duck boats, and crazy talk about $2 Million being “nothing” in this day and age.

It’s also a good reminder that, in spite of a rough patch here and there (like the 6% decline in the S&P 500 over two days earlier this week), most well-prepared retirees in the past have ended up with much larger portfolios than they started with on their retirement day.

Dr. Jim Dahle believes in a four percent withdrawal rate as a great starting point, and he doesn’t see the sense in relying on something ridiculously low, like the 2% or 2.5% withdrawal rate I was planning on when I wrote my first investor policy statement.

Read on to learn how much money you might have left over for your charities or children if you follow a reasonably safe withdrawal rate pattern when retired. This post appeared first on The White Coat Investor.

How Much Money Will You Take to Your Grave?

I have been having a few thoughts lately about withdrawal rates, spurred by a comment  on my previous post on the subject. Many investors don’t realize what usually happens in a withdrawal scenario. When they look at a Safe Withdrawal Rate (SWR) table like that from the Trinity Study, (reproduced below) they simply try to figure out how to have a 100% success rate (i.e. never run out of money.) 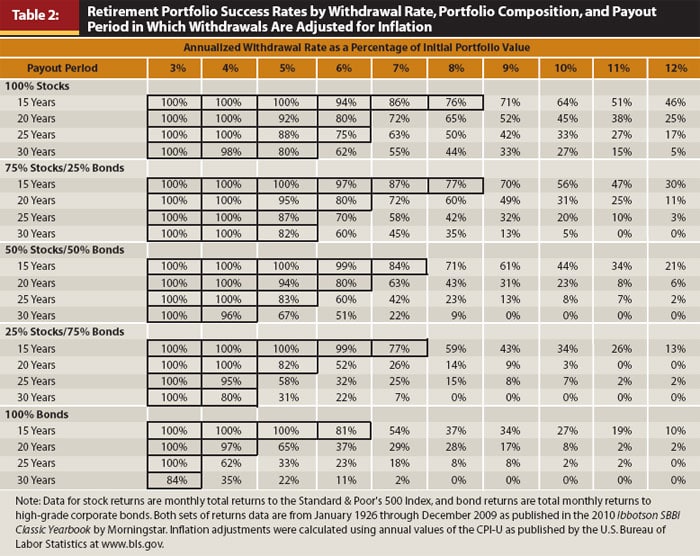 With our current low-interest rate environment, and many gurus projecting low future stock returns, some investors even argue that the Safe Withdrawal Rate should be 3.5%, 3%, or even 2.5%. I think that’s kind of silly for several reasons I’ve discussed before and will discuss again in this post.

However, what people DON’T really think about, is just how much money they are likely to have left if they go for a “100% success SWR.” In order to look at that, it is worthwhile looking at a paper by Phillip Cooley in the Journal of Financial Planning.

In this paper, Cooley et al included this table, which shows how much money you have left, on average (technically median), using any given withdrawal rate adjusted for inflation. 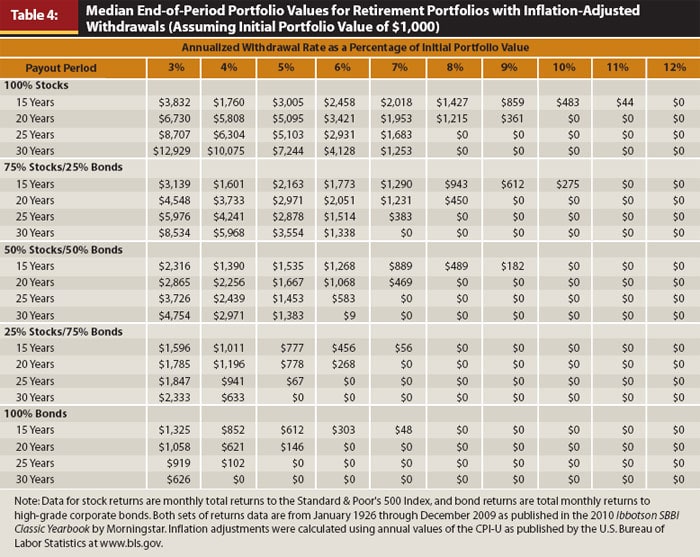 This table assumes a starting portfolio value of $1,000. So if you use a 4% withdrawal rate (adjusted each year for inflation) and a 50/50 portfolio, on average, after any historical 30 year period, you would be left with $2,971 at death.

That’s right. On average, you die with three times as much money as you had upon retiring. Even with a 5% SWR you will on average end up with more than you started with. Surprised? Don’t be. That’s just the nature of averages. That’s why it’s called a “Safe” withdrawal rate. It’s very safe. You can take out more money, and may even do okay, but that would be a risky withdrawal rate. You know, 6 or 7%.

Just for fun, consider a hyper-conservative investor who goes with the 3% SWR for 30 years and has a 100% stock portfolio. He ends up with 13 times as much as he started with…on average. Half of those guys ended up with MORE!

If your goal is to enjoy your money and use it to increase your happiness (and that of others) in life, then I would suggest that a withdrawal rate that is very likely to leave you with 10 times as much as you had on the eve of retirement is probably the wrong approach.

Six Other Reasons To Avoid Hyper-Conservatism

There are other good reasons not to use some ridiculously low withdrawal rate (like 2.5%.) You all know I like lists, so here’s another one.

# 1: You probably won’t live for 30 years after retirement.

# 2: Nobody actually follows a fixed SWR

Everybody I know in real life retirement keeps track of how they’re doing. If their returns are poor, they cut back, tighten their belt, cancel a few vacations, give less to charity, give less to heirs and make it work. When times are flush, they spend a little more. Retirement withdrawal rate researchers like Wade Pfau are starting to acknowledge this fact in their work, but real retirees like Taylor Larimore have known this for years. In a recent forum post, Taylor explained his simple strategy:

I retired in June of 1982 at the age of 57. We had about a $1 million dollar portfolio to last us the rest of our lives. I didn’t know about safe withdrawal rates (the Trinity Study wasn’t published until 1998). We had no computers, Internet, Monte Carlo, or sophisticated calculators. We only knew that we had to be careful to make our money last ($1M at 4% = $40,000/year before tax).

So what happened? We simply withdrew what we needed and kept an eye on our portfolio balance. Most years our balance went up and we spent the money on vacations, luxuries and charity. When our balance went down, we tightened our belt and economized. This is what most people do and it works.

Critics point out that Taylor retired into the greatest stock and bond bull market of all time. That’s true. But just because nothing bad (you know, like 1987, 2000-2002 and 2008-2009) happened doesn’t mean Taylor wasn’t prepared to economize in case it did. A million bucks in 1982 was no small portfolio. That’s the equivalent of $2.7 Million in 2018 money, far more than most docs retire with.

# 3: Most Retirees Spend Less As They Go

Retirement spending follows a curve where it is highest the first few years of retirement when lots of purchases are made and traveling is done and then gradually decreases until just before death, when it ramps up dramatically with medical and/or long-term care costs. So if 4% (indexed to inflation) provides plenty of money for those first 5 years, it’ll probably be more than enough for the 20 after that!

The Trinity Study authors themselves suggest a 75% success rate certainty is “good enough.” Even William Bernstein, who is quite conservative with regards to future expected returns, has written that going for anything more than 80% is foolish because there’s a 20% chance of your country imploding at some point during a 30-year retirement.

# 5: Your AUM Advisor Has A Serious Conflict Of Interest

Your advisor, especially if paid a percentage of assets under management (AUM), may suggest you only withdraw 2.5-4% of your portfolio each year. However, always remember his or her bias.

First, the larger your portfolio gets the more he gets paid. The biggest threat to your portfolio as a retiree is you spending it! So if he can keep you from spending it, his paycheck gets larger. AUM fees are the best kind of passive income!

Second, he’s only going to get in trouble if you run out of money and live a long life. If you die with lots of money, nobody is going to get mad at him. But he could really care less how often you go on vacation, how much you give to charity, or how comfortable your retirement is. Higher portfolio withdrawal rates are all downside to him, whereas they are a mix of upside comfort and downside risk with you.

Those who acquire large nest eggs and those who read financial blogs like this one are honestly very unlikely to ever run out of money. It is really hard to go from saving and investing during the accumulation stage to actually spending your money in retirement.

My parents have been fully retired for several years now, living on a pension. My dad is now taking Social Security. If it wasn’t for the IRS mandated RMDs, I don’t think I’ll ever get them to start spending anywhere near 4% of their stash each year. They didn’t become affluent by being spendthrifts, and who is going to change habits after half a century of living?

However, they also used long-term corporate bonds- not exactly the short term treasuries that many investors are using today in their portfolios. While none of us really know what to expect out of equities in the future, bond returns over the next 5-30 years are very likely to be lower than they have been over the last 30 given the interest rates we are starting from. Those two factors probably cancel each other out…at best.

The other factor that far too few investors take into account is the effect of advisory and other portfolio fees. If you’re paying 1% in fees, your 4% is really 3%.

[Update: I was challenged by someone who cited Kitce’s study about how a 1% AUM doesn’t lower your SWR by a full 1%. I found the argument weak in that it certainly DOES lower your withdrawal rate by 1% of your assets in year one and that whether it lowers the SWR by 1% or not, it still lowers the amount of money you have to spend by the amount of the fee, which is really the point of my statement anyway.

Why any retiree would consent to have 1%+ AUM fees assessed against their portfolio when there are asset managers willing to do it for far less (or even a flat annual fee of just a few thousand) is beyond me, but I’m sure there are plenty of retired docs out there paying $20K+ a year in asset management fees.]

As I’ve said many times, the point of the Trinity study wasn’t that the SWR is 4%, it was that the SWR is not 8%, 10%, or even 12%. Start with something around 4% and adjust as you go. Staying flexible is immensely valuable both in increasing your ability to spend as well as decreasing your likelihood of running out of money if you are lucky (unlucky?) enough to live into your 90s. Better yet, put a floor under your spending with Social Security, pensions, and perhaps even a SPIA or two and then have at it with your portfolio withdrawals.

What do you think? Were you aware that most who followed a 4% SWR rule die with more than they started retirement with? How are you (or how do you plan to) managing your retirement withdrawals? Comment below!

40 thoughts on “How Much Money Will You Take to Your Grave?”