As you can tell by the name of this place, I’m a pretty big believer in the power and accessibility of early retirement to all physicians.

Basically, it comes down to whether you want to retire early enough to do what it takes to put yourself in a position to pull the plug on your career. What does that mean in terms of your savings rate? What about a withdrawal plan? What are key considerations for physicians seriously looking into developing an early retirement plan?

In this article, originally published on FiPhysician, we take a look at how early retirement is possible for physicians, what the numbers look like for how early and how much, and other points to be aware of as you engineer your escape. 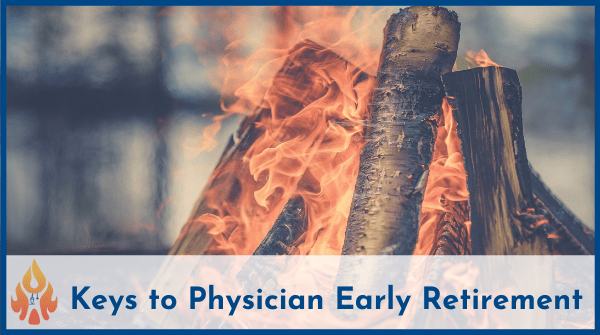 Physician early retirement is not a novel idea, but perhaps one that now has a more developed framework. It is an idea whose time has come: take back the keys to your j.o.b. and work because you want to work, not because you have to work!

So, how is physician early retirement done? What do you need to know to get the keys to the FIRE?

Can a Physician Early Retire?

Most anyone can retire early if doing so is made a priority. Physicians are not special, though there is a growing physician community preaching FIRE, perhaps as a backlash to the burnout epidemic. We understand now that the hospital won’t love us back.

In fact, there are a lot of features of being a physician that prevent us from considering early retirement.

What are the disadvantages physicians face trying to early retire?

While doctors are not born into life with targets on our back, we often get them as we become beguiled by the supposed complexity inappropriately promoted by Wall Street. Accumulation is just not that difficult, folks!

And there are advantages for physician early retirement:

So, can physicians retire early? Yes, but like most audacious goals, it takes planning and plenty of elbow grease.

How Early Can Physicians Retire?

If you bother to go through medical school, and you are able to escape on the other side without a lot of student debt, it seems like a decade is a good goal for the earliest you might consider retirement.

How early can a physician retire? It depends on your savings rate. Savings rate is especially important since it has expenses as an integral part. An infinite savings rate means you can retire now, whereas the zero savings rate asymptotically approaches retire never. Remember that savings rate is more important than investment returns for most of your early retirement plan.

To put that in perspective: 4 years of college, 4 years of medical school, 3-8 years of residency, and 10 years working. This means at the earliest, a physician might be 42-47 before retirement. That is 32 years learning, 10 years working, and 60 years retired. Can you really make your money last that long?

Can a Doctor Retire Early at 45?

Can a doctor retire early at 45? Sure!

By the time you are 45, you know your expenses and have had time to partake in the hedonic treadmill. Either you stayed on said treadmill and you will retire at a regular time, or you were able to control expenses.

The hard part is not moving the goal posts: to find out what enough spending is and stick with that. Joy (utility) goes up with increased income, but only to a point.

A physician can retire early at 45 by understanding yearly costs of living, and then multiplying that number by 33.

What is a Physician’s Early Retirement Number?

So, what is a physician’s early retirement number? Thirty-three times your yearly expenses.

What about the 4% Safe Withdrawal Rate? There is plenty written that the 4% rule no longer is true, given high equity prices and low interest rates, but people who spout that line don’t understand how the 4% rule was derived. (And as aside, those same folks often use Monte Carlo projections which do not favor early retirement.)

I have done some modeling on the 3.33% safe withdrawal rate for early retirement, and I’ll have you read that for background.

The traditional 4% safe withdrawal rate is fine for a traditional retirement. Smart physicians who want to oversave for early retirement will be more comfortable at under that number, in the range of 3+%.

Average Net Worth of Physicians at Retirement

Those of you still on the climb: focus on savings rate and don’t forget to enjoy the journey. As seen with the average net worth of physicians at retirement, most won’t make it.

Let’s get into the commonly asked questions of physicians considering early retirement and discuss 7 powerful strategies.

Health care insurance is an expense. As feared as it is by the general public, it is just a line item on your retirement budget! At least physicians know how to navigate the system.

You can go for Affordable Care Act premium tax credits or you can think about a few other options such as health shares or catastrophic plans.

Another consideration: remember you can run your health insurance costs and a deductible business expense if you have 1099 income. A couple weeks of locum will go a long way in physician early retirement.

Access to retirement accounts is another “big problem” with what are actually pretty easy solutions if you understand physician early retirement.

A Roth Ladder to Access Retirement Accounts without Penalty

Remember that your withdrawal plan is a vital part of your early retirement plan.

Physicians have struggled through the educational system and overcame q3 call and 36-hour shifts. Put simply, we can do whatever it is that is important to us.

As you have a long time horizon, it is best to keep an aggressive asset allocation. But not too aggressive!

It is best to be a DIY investor if you are considering early retirement. Remember that the “average” fee for professional money management is 1%. If you are trying to live off of 3.33% of your nest egg, that means you are losing 30% of your money to the financial advisor. Sit with that for a moment.

A simple three fund portfolio is adequate if you consider asset location and understand that your stock/bond ratio provides you with 90% of the total returns. Understand your asset allocation and don’t feel the need to overcomplicate things.

You can be an excellent DIY physician investor!

There are bond alternatives you might consider for your safe money, but you must have bonds in your portfolio as safe money to prevent sequence of returns risk.

I had a lot of fun writing guest posts on ERN on the topic of sequence of returns risk, such as this post on a long retirement at the four percent withdrawal rate.

ERN is the wiz kid of sequence risk in early retirement, but I’ll be honest; I can’t read most of his stuff.

What I’m thinking about lately: remember sequence risk is in the future until it is actually happening. Once it is happening (for example, the market is down more than 30%) you need to re-balance into the downturn. After that market downturn, there is no more sequence risk. I’ll be presenting next year at WCI’s conference on the topic of personalized glidepath in retirement, and I look forward to developing on this theme thereafter.

If physicians plan to retire early, it is almost mandatory to understand the tax code! This is no joke. Taxes will be your largest expense in retirement, and there are ways to massage taxes such that you pay less over your lifetime.

Once you’re financially independent and retired, you can also cancel life insurance; you might also ask yourself, when should I cancel my disability insurance?

Some doctors are retiring early because of Covid, and many other doctors plan to retire early because it is the right thing to do!

Of course, “never retire” and “retire early” are actually sides of the same coin. With one, you work for money, and the other, you work for passion. Or maybe both are passion.

Physicians can reach early retirement. It takes commitment and hard work, but that is nothing to physicians. You have to have a plan, and it takes a ton of knowledge. I hope this post helps you reach your goals.

2 thoughts on “Physician Early Retirement: Keys to the FIRE”