Tired of hearing my voice yet? Sorry about that. Move along. Unless you want to hear my best interview yet! I talked with Jonathan and Brad of ChooseFI for a riveting 48 minutes in Episode 026 | Physician on FIRE | FI for Medical Professionals | Financial Freedom vs Financial Independence.

I really need to find my way to Havasupai. Two of our physician blogging friends have reported on their trips to this picturesque spot. Julie @ Choose Better Life shared Hiking at Havasupai. Dr. Curious @ My Curiosity Lab captured similar stunning images in Wanderlust: Havasupai.


The smiling radiologist known as the Happy Philosopher delivers 16 tips to improve your life and be happy. Make Your Life Upgrade Proof.

What do I call myself after I retire early? A doctor? Dr. Robert Baker attempts to answer the question @ KevinMD. A Retired Physician Asks: Am I Still a Doctor?

Mrs. Grizzly quit her job! And she was in Big Law. Read all about it @ Grizzly Mom & Dad in the appropriately titled I Quit My Job.

Mr. Crazy Kicks quit his engineering job a year ago. How’s it going, Mr. CK? What It’s Like One Year After Quitting My Job.

I preach Geographic Arbitrage, but it doesn’t work for everyone. How is Miss Bonnie MD getting ahead in New York City? How We Are (More Than) Making It in a HCOL.

There’s frugal. And then there’s Jacob from Early Retirement Extreme who lives in the San Francisco bay area. How I Live on $7,000 Per Year.

I love stories like these. First featured by Chicago’s Fox 32, then USA Today, Russ Gremel donated $2 million to the Audobon Society for the purchase of a 395-acre property to be preserved as a wildlife refuge in his name.

I was drawn to the story for several reasons. First, I think it’s wonderful that Mr. Gremel chose to donate a generous sum of money, and that he chose to preserve nature with it. 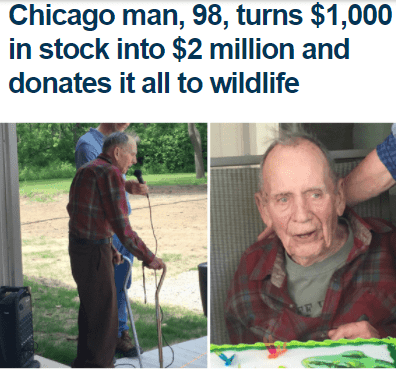 Second, based on facts in the story, it seems that Mr. Gremel found the cause more compelling than spending on himself. According to the article, he lived a simple lifestyle, living nearly his entire life in the same home which he inherited from his parents.

He was also an early retiree. He practiced law, but lived a simple life, and gave it up to retire at age 45.

Was he a savvy investor, picking out the needle in a haystack that would rise to the top, returning 2,000 times the original investment? If I flew down to Chicago, would he share his secrets with me while we take a leisurely stroll through the Gremel Nature Preserve?

Before firing up Orbitz to book my flight, I decided to do some research. 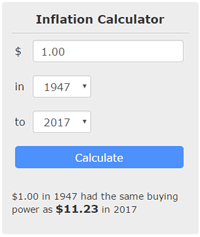 Mr. Gremel bought $1,000 worth of Walgreens stock about 70 years ago, and turned it into two million dollars.

I don’t know, but I’ll bet you could buy some really great stuff for a nickel. Fortunately, we don’t have to guess. DollarTime has a simple Inflation Calculator for that. So a dollar then is now worth $11.23. And $1,000 meant investing the equivalent of…

I don’t know, but Excel does. Plugging in the initial investment, the value 70 years later, and using the XIRR function, we arrive at the amazing figure of…

That’s what compound interest can do when you buy a stock at age 28 and sell (or donate) at 98. That’s a great return, and I would be thrilled to see returns like that over just one decade, let alone a lifetime.

I’ve Included a simple XIRR calculator in the Excel File with all the calculators I’ve created for posts on this site. Want a copy for yourself? Subscribe and I’ll send it to you.

How did he know that Walgreens would perform so well? A detailed analysis of the company structure? Pure dumb luck? Or something else?

He told the Chicago Tribune that people would always need medication and women would always need makeup. It’s perhaps an antiquated view, but it’s a view he held just after World War II. You know, the era where our antiques come from.

What if he hadn’t been a smart stock picker?

He got a great return, but it’s not that far above the historical average, right? And weren’t stocks beaten up during the Second World War? What has been the market return since 1947? 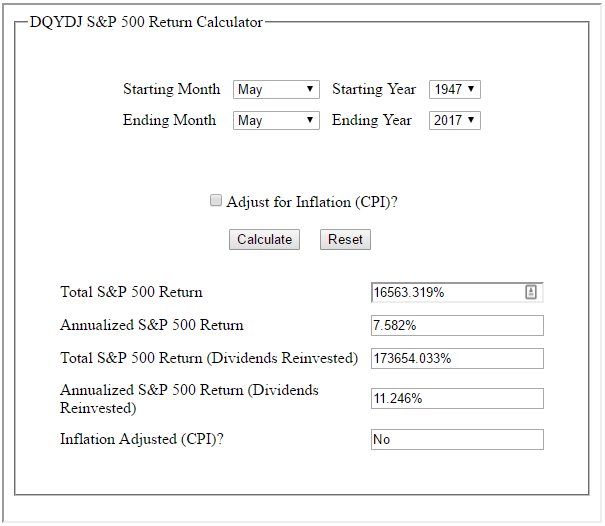 Or 0.21% less than the return from the Walgreens stock.

I point this out not to take anything away from Mr. Gremel (or Walgreens for that matter) but to point out that he didn’t get lucky, nor did he pick a stock that significantly outperformed the rest. He didn’t buy a stinker, either. He did two really smart things.

He bought. And he held.

Truthfully, he did three smart things. He bought, he held, and he lived a very long time.

Here’s to you and me buying, holding, and living a very long time.

You’re still not using Personal Capital? Track all your accounts in one place like I do.