All we can do is play the cards that we are dealt, invest early and often, and steel ourselves to, as Jack Bogle would say, not just do something, but stand there, and stay the course.

Of course, that’s easier said than done, but what might make it a little easier to take that tonic moving forward is seeing how that advice played out during the three most recent severe bear markets we have all experienced

In this post, Banker on FIRE takes us through how a hypothetical investor with a nice round six-figure sum would have endured the previous trying times, and gives us all a little courage for the bear market we find ourselves in today. 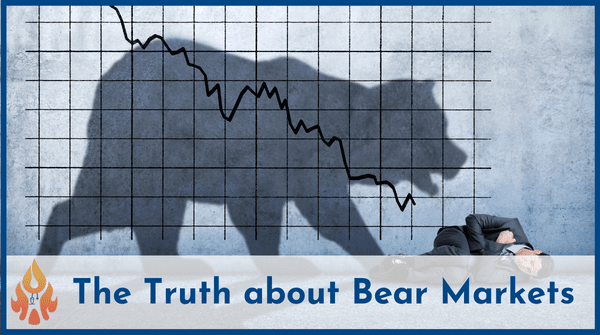 If you are at the very beginning of your investing journey, a bear market is nothing short of a godsend.

You’ve got pretty much nothing to lose and everything to gain as you snap up stocks at deeply discounted prices.

If you happen to be in that camp, consider yourself lucky, because you’re about to put your equities portfolio on steroids.

But what about the rest of us?

The vast majority of stock market investors aren’t so lucky as to start investing right at the beginning of a bear market.

Instead, they’ve been at it for years.  As a result of diligently saving and investing, they’ve accumulated some very sizeable portfolios, only to see them decimated by 20%, 40%, or even 50% in just a few short months.

These are not the kinds of losses you can make up for by increasing your savings rate by a few points.

Instead, we are talking about years and possibly decades of contributions being wiped out by the market meltdown.

Does this year’s 20% market decline spell the end of your investing journey?  Or is there light at the end of the tunnel still?

We’ll go down memory lane on three of the worst bear markets in recent history.

In each case, we will track the experience of an investor who started with $100,000 in their brokerage account at the very start of the bear market and kept contributing $500 a month ($6,000 a year) thereafter.

That year saw one of the sharpest stock market declines on record.  Between January and December, the financial crisis nearly toppled the global economy, and the S&P 500 registered a total decline of 37%.

Talk about a catastrophe.

But as we all know, the next 13 years have been a breeze.  The worst you would have to contend with was a 4.4% decline in 2018, which seems like child’s play compared to what we are going through now.

By the start of this year, you would have been feeling pretty good with about $716,000 in your portfolio.

But let’s run the actual numbers on your portfolio’s performance over the past 13 years.

No, we don’t know what the future holds.  For all we know, there may be way more pain in the works.

Equally, show me someone who is crying over a 10% annualized return and I will show you someone who really shouldn’t.

Going Back In Time

Let’s now rewind the clock back another ten years or so, all the way to that fateful January 2000.

At the time, investors were riding the dot-com sugar high, and little did they know that the party was about to come to an extremely painful end.

In the previous 25 years, the market has registered just three annual declines.

Well, even with three annual $6,000 contributions, it was only worth $75,000 by the time December 2003 rolled around.  Can’t imagine spirits riding too high at Christmas that year.

Things then got better – for a short time.  But in 2008, you’d have gotten mauled by the GFC bear market yet again.

That’s what two bear markets in two decades will do to you.

And yet, this is still the kind of return that pretty much quadruples the money you’ve put to work in the first place.

For our last case study of the day, let’s go all the way back to January 1973.

Want to know what kind of pain a 1970s investor with a 30-year horizon would have to live through?

What followed, however, was one of the most prosperous stretches in the history of the stock market.

As I mentioned above, over the next 25 years, the market registered just three annual declines:

And then, of course, it all came crashing down.

Over the next three years, you’d see your brokerage account balance decline by more than two million dollars – all the way down to $3.8 million.

If that isn’t painful, I don’t know what is.

Except that even after that painful decline, your annualized return would sit at 11.2%. And yes, this is after one of the longest, nastiest bear markets at the very end of your investing journey.

As always, history doesn’t repeat itself, but it often rhymes.

If you’re reading this, you’re probably in one of three groups.

Group #1 is just starting its investing journey.  If that’s you, please re-read the beginning of this post, and get on with it ASAP.

Group #2 is the exceedingly small number of people who by some stroke of luck cashed out their portfolio in January 2022 and are now sitting on a pile of cash.

If that’s you, count your lucky stars, and then devise a plan for getting back into the market.  Remember, no one rings the bell at the start of a bull market.  You may have gotten lucky once but getting lucky twice is HIGHLY unlikely.

Group #3 is the majority of folks reading this, myself included. You have a very sizeable portfolio, perhaps well into seven figures. You have just taken a MASSIVE loss, and it hurts. And now you need to decide the way forward from here.  Do you capitulate, or keep on going?

Well, looking at the data above, I quite like my chances. I don’t know how long this bear market will last, but I’ll definitely be there when we come out on the other side. And I sure hope to see you there as well, because while fortune may favor the bold, the stock market sure favors the patient.

As always, thank you for reading, and happy investing!

3 thoughts on “The Truth About Bear Markets”