I was browsing the Bogleheads forum a few weeks ago, the way I often do. One particular thread title caught my attention. “High Income Earner Humbly Seeks Advice”

I write for high-income professionals, and the humble ones are my favorites. I decided to take a peek to see if I could offer any advice. After reading through the post and mostly excellent responses, I didn’t necessarily have a lot to add — we Bogleheads know our stuff — but the sheer volume of information pouring in was a bit overwhelming, sometimes conflicting, and a whole lot to take in for the humble high-income earner who originated the post.

I reached out to username LongTerm1, who shall now be known as Dr. SW (short for Dr. Stealth Wealth, of course) and offered my assistance. If I was going to take the time to tie it all together and offer a few pieces of advice of my own, I might as well get a fascinating blog post or two out of it. We exchanged a few messages, he answered a few nagging questions I had, and I got to work creating an Investor Policy Statement for him.

That’s a grand total of $3,093,000 worth of invested assets, plus a paid off home, and a commercial property with additional equity. In other words, he’s got about 44 years worth of expenses at $70,000 a year. Even with a generous additional $30,000 budgeted for health care (currently covered by his business), he’s got over 30 years covered.

That qualifies as easily financially independent in my book, but Dr. SW isn’t interested in giving up this extraordinarily lucrative gig that he worked so hard for and enjoys for the most part.

No Hat, All Cattle

In The Millionaire Next Door, we learn that Texas has more than its share of “all hat, no cattle” types. The guys and gals who look the part and wear the hat, but have no cattle to tend to. In other words, they look like they have money, but they don’t. It’s the inverse of stealth wealth.

Dr. SW is no hat, all cattle. He likes to blend into his community, and like me, is uninterested in owning or flaunting luxury items. He may not be wearing a ten-gallon hat, but he’s got acre upon acre of figurative cattle.

He states he would like to work at least until age 50, more likely 55. Let’s plug some numbers into my compound interest calculator to see what he might expect from another 12 to 17 years of labor at this pace.

After Dr. SW deducts his tax-deferred investments of about $200,000 total into the cash balance plan, 401(k), and his donation to the church, let’s say the taxable income is in the neighborhood of $1,600,000. With federal income tax in the neighborhood of $600,000, they’ve got a million dollars left (and he’s already made close to $200,000 in tax-deferred investments).

After their $70,000 in living expenses are subtracted (let’s say rounded up to $100,000 for simplicity), they’ll have $900,000 to invest. Add that to the $200,000 in cash balance and 401(k) plans (his wife in on the payroll, as well) and they can invest about $1.1 Million dollars per year. Let’s call it $90,000 a month. The overwhelming majority of the money will be in the taxable account, so they’ll be able to keep their overall fees quite low despite the Cash Balance Plan, where fees can run several percent.

We’ll call tax drag 0.5%, calculated using a dividend from passive index funds of roughly 2% taxed at the maximum 23.8% long-term capital gains rate. What can he expect to have at age 50, assuming a 6% compound annual growth rate? 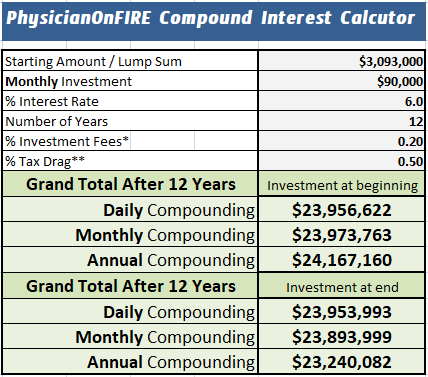 What if he works until age 55? 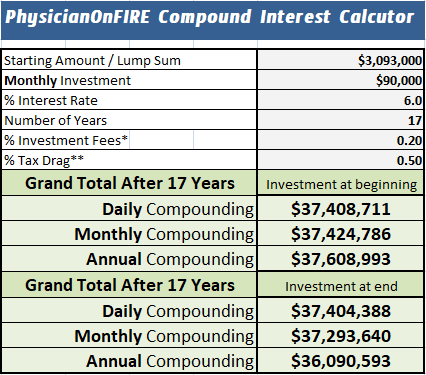 It’s fun to play with calculators. Don’t believe me? Plug a few numbers in the gray boxes and see what you can come up with. Dare to dream big!

Download this calculator and all calculators used in posts on the site with a free subscription to my e-mail list.

Like the decamillionaires gathered in the opening of The Millionaire Next Door, Dr. SW is not likely to change his ways, suddenly preferring Robin Leach’s champagne and caviar when he’s grown accustomed to a comfortable middle class lifestyle. 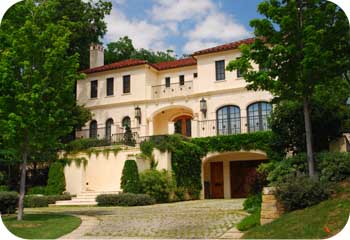 If he’s not interested in luxury goods and private planes, what does Dr. SW want? He wants a simple, sound investment plan. He would like to continue donating to his church. He would like a secure future, while letting his money continue to work for him. He would like to use his skills to do mission work someday.

I think we can deliver a plan that will help do all of this and more. With the income he’s got, this plan doesn’t have to be perfect. There’s no need to overcomplicate things. Of course, the income could change in a heartbeat with the changing tides in health care reimbursement, but it’s fair to say that Dr. SW is in a position to remain in very, very good shape for the foreseeable future.

Since he can easily afford either option, let’s choose the one that might help him sleep better at night — the one with 20% bonds. He’s already got the cash balance plan, which, as a fixed income product, we’ll lump in with the 20% bond allocation.

Using these numbers, the immediate moves are fairly straightforward.

If the SEP-IRA and traditional IRA can be rolled over into the 401(k), Dr. SW should go ahead and do that now, allowing for the possiblity of Backdoor Roth contributions in the future.

I like bonds in tax-deferred, but Dr. SW will also have [municipal] bonds in taxable, too. For now, I would exchange the contents of the 401(k) (and other tax-deferred accounts if not rolled over to the 401(k)) to a simple total bond fund like Vanguard’s VBTLX.

That gives Dr. SW right around 20% in bonds and fixed income.

Although most of Dr. SW’s taxable account is currently invested in a money market fund, he does have some individual stocks and funds that have gains and losses that mostly offset one another, with an overall total gain of less than $10,000. Dr. SW has two good options here.

The simple option is to simply liquidate the winners and losers so that they offset one another and keep the equities with the largest gains. Simpler yet would be to sell them all and pay a couple thousand dollars in capital gains taxes, but there’s no need to do that just yet.

A second option, which I feel is the better option, is to establish a donor advised fund (DAF) via Vanguard Charitable with his winners, and sell the losers for a loss. 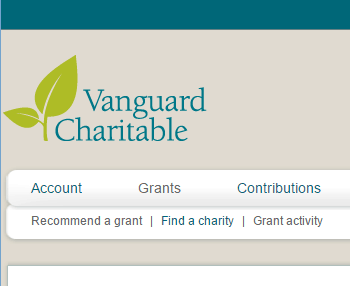 The Vanguard DAF requires a minimum of $25,000 to start and grants doled out are a $500 minimum. Fidelity and Schwab have DAFs with lower minimums, so those should be considered as well, but Dr. SW has the means to stick with Vanguard, which is a company he’s invested with for several years already.

Taking losses will allow Dr. SW to take a $3,000 deduction this year, saving about $1,200 in income taxes, and additional losses can be carried over to additional years.

Of course, jumping in all at once can be nerve-wracking, particularly in this historically high valuation environment amidst one of the longest bull markets in history. Going all in is essentially the same as investing a windfall, although in this case, the “windfall” has been building steam for several years.

A third option is to invest half, and dollar cost average the remaining half over six to twelve months. This essentially hedges the bet and gives the investor a return that is a hybrid of what he would have seen with either option. I like to recommend this strategy to someone who is on the fence between the two options in what is essentially a false dichotomy — it doesn’t have to be one or the other.

We’ve got a solid plan for the good doctor’s current assets, but we’re just getting warmed up. We haven’t yet touched on his children’s’ future. There’s been no mention of insurance. Asset protection must be considered, and we need a plan to invest the income that continues to come pouring in!

Continued in Part II, where we will address all those issues and more.

Would you have the discipline to limit your budget to a five-figure number with a seven-figure after-tax income? What recommendations would you have for the good Dr. SW? What would you do that income?