Another quarter has come and gone. Supposedly, the winter has also come and gone, but you wouldn’t know it if you live Up North like we do. What is this thing you call Spring? She sounds delightful, but I haven’t seen her.

This is the ninth quarter since I started this site, and I just sent out my 9th “Progress Note” to e-mail subscribers. That contains the blog performance info below, plus additional revenue and profit information that I only share with subscribers. If you’d like to see how I’m on pace for six figures in revenue this year, please subscribe here:

This is how our retirement dollars are currently allocated. Not included are the properties we own including our home, cabin, and lakefront property (two of which will be eventually sold), and $248,000 in donor advised funds. 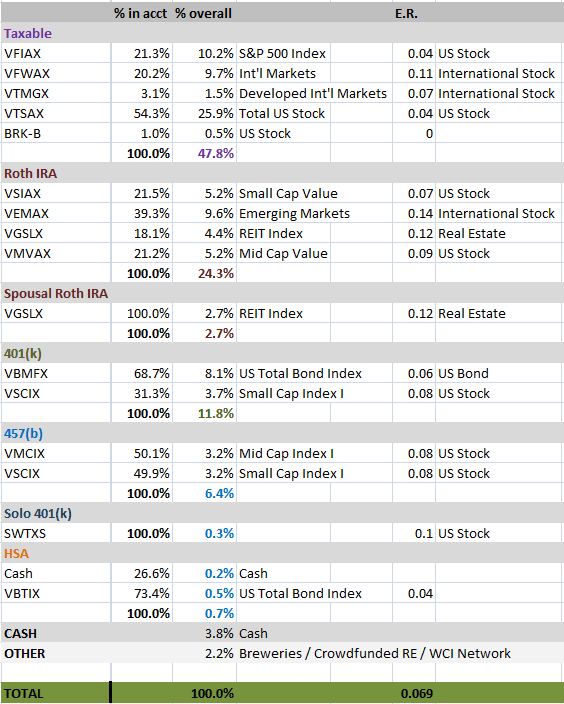 With under 19% in tax-deferred dollars, we’re well-positioned for a low-tax retirement once I tighten the spigot on the income streams. Roth money comprises 27% of the portfolio, and I plan to touch it last. Most likely, we’ll be doing some Roth conversions when my marginal tax bracket drops.

I’ve still got more cash than I normally keep around. This isn’t “dry powder” to invest, but rather money set aside to start building on that lakefront property, which we hope to do as soon as this coming summer.

I’m a Vanguard fan, and the only non-Vanguard funds I own are the one individual stock, Berkshire Hathaway, and a Schwab Total Stock Market Fund in my Solo 401(k). Note that it could be reasonably argued that this fund is not substantially identical to the Vanguard Total Stock Market Fund as they don’t hold the same number of stocks. Why does that matter? Tax loss harvesting, for which I created a step by step guide recently.

For the first time in a while, I have a number of losses to report, and the 2nd quarter is not off to an auspicious start, either.

Overall, The PoF Portfolio suffered a drop of 1.17% as compared to a 1.22% decline in the S&P 500. So no significant difference there. Data and screenshots are from Personal Capital, my preferred method of tracking my portfolio’s performance and updating the spreadsheet above with one login.

A lone bright spot was the performance of the Emerging Markets Index, returning 2.08%

The mid-cap index broke even for me, with a return of zero. Could have been worse.

Bonds performed worse. It was a “smooth ride,” but a downhill one, for a loss of 2.12%. Could have been worse.

The biggest loser of the bunch was the REIT index, losing 8.13% in the first quarter of 2018. People worry about the risk involved with Crowdfunded Real Estate, but there’s clearly risk associated with any form of real estate. This particular index fund lost 78% of its value in the Great Recession, and Joseph Hogue lost his shirt investing in single-family homes.

Well, it could be if we didn’t travel so much. So far, I’ve paid my way to Florida and New York*, and the four of us spend most of February in Hawaii. Traveling and sightseeing in Hawaii is not the most frugal thing to do, particularly when island hopping.

*The Florida and New York trips were for blog-related travel, but I include them in our spending, too. I do get to deduct some of those travel expenses at tax time, so the cost is not quite as large as reported here. My travel to Utah was fully reimbursed, so that didn’t show up on the expense report at all.

We also purchase our tickets to Honduras for a medical mission trip with a side trip to Roatan beforehand. I was able to book the four round trips to Tegucigalpa with American Airlines AAdvantage Miles earned via a combination of credit card bonuses and reward points from assisting in an in-flight medical emergency. The round trip flights to Roatan, Honduras were surprisingly expensive at over $200 apiece, and we had to pay for those.

Travel accounted for more than a third of our budget, and we feel it’s worth it. We also spent about $2,400 on phase I of our younger son’s orthodontic work. 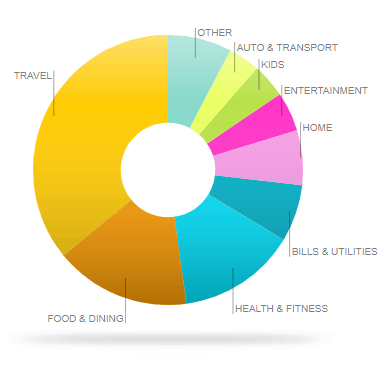 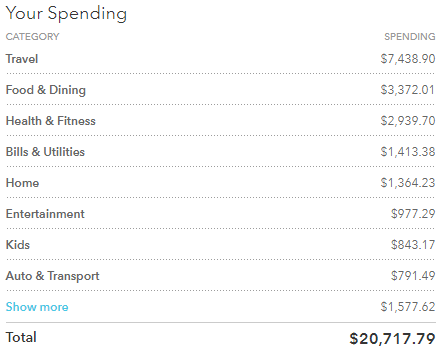 If we hadn’t gone anywhere and had kids blessed with perfect teeth, our spending would have been nearly cut in half. But, we like to get out of Dodge, particularly in the winter, and our boys are regulars in the orthodontist’s chair. As such, it appears as though we’re on pace to spend more than $80,000, but I’ll be surprised if the final tally isn’t under $70,000 by the end of 2018.

Most of the other expenses are in line with past spending reports. Food and drink is typically $1,000 to $1,200 a month. Utilities, including cell phones and internet, run $300 to $500 a month. Most of the “Kids” budget is in music lessons. We’re still doing piano, and have added guitar and ukelele.

The entertainment budget is bloated compared to normal. I probably should have mentioned to my wife that I put four tickets to next year’s Final Four in Minneapolis on our credit card before publishing this. If my smiling face appears on a milk carton soon, you’ll know why. It is a ticket lottery, so there’s at least a decent chance I’ll “lose” and get my money back this fall.

With every update, I have been able to say we saw the best quarter ever here at Physician on FIRE. This quarter was no exception as there were 610,000 pageviews in the first three months of the year as compared to 1,500,000 in all of 2017. March was the best month ever with 240,787 pageviews. 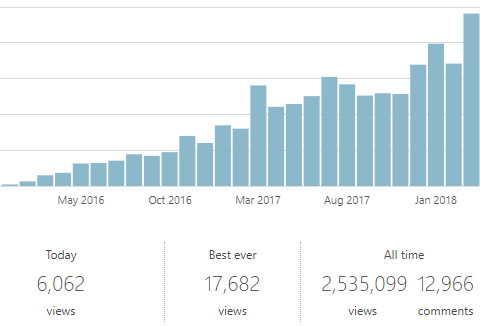 As of 4.2.2018, the site has 385 published posts and 40 pages. These have been visited by people in 210 countries. Still no visitors from Greenland or North Korea.

The Backdoor Roth post, updated it with fresh screenshots in 2018, is easily tops. The PoF portfolio, which is also updated regularly, replaced A Tale of 4 Physicians with the last spot.

The top post was updated and republished this quarter, and the next three posts were new in the first quarter. It’s great to see readers engaged with my new posts.

Where do people go from Phyisicianonfire.com? (mainly referred from The Sunday Best & Christopher Guest Posts🙂 All time clicks:

I’ve mentioned this before, but whitecoatinvestor.com would very likely show up as #1, but some setting must exist that keep me from seeing those clicks in the Jetpack Site Stats. Passive Income MD, the newest addition to the WCI Network, dropped to #6 due to many clicks to Kitces’ tax reform post at Nerd’s Eye View.

Thank you all for being loyal readers and for helping me spread the message of financial independence. For those of you whom I have met at gatherings like WCIcon18 and FinCon17, it was great to meet you. If we haven’t met yet, I hope our paths cross in the future.

I’ll be attending FinCon18, the pre-conference Cruise to Cuba, Camp FI Midwest, and perhaps a spontaneous gathering here and there. I also hang out online in my Physicians on FIRE Facebook group. Hope to see you there!

Cheers to another successful quarter!