Each quarter, I like to share updates on our investment portfolio, family spending, and blog statistics. The fourth quarter has come and gone, along with a very prosperous year.

Our spending, which was $62,000 in 2016, was remarkably stable in 2017. Keep in mind, we have paid off our mortgage and student loans. Our kids are in public schools. Being FI, we’ve dropped life and disability insurance and health insurance is covered by my employer. We track donations separately from “spending.”

Blog performance was phenomenal, thanks to readers like you. Let’s get to all the details.

First, let’s look at the detail of my asset allocation. I’ve made one change since my most recent update, adding my alternative investments which include microbrewery investments, crowdfunded real estate investments, and a small portion of Passive Income MD. These will be in the spreadsheet, but not reflected in the screen captures from Personal Capital below.

These “other” investments aren’t as liquid as the index funds, but nevertheless have value and are assets that can help fund our retirement. I like to say that the brewery investments, particularly the dividends I get from them, are as liquid as liquid gets, but just because I can get hoppy treats any time I like doesn’t mean I can get the money out just as easily.

Our donor advised funds are not tracked here, as that money’s no longer ours, but the value has grown 6.5% despite our year-end giving of about $10,000 after we topped them off in November.

Our 529 Plans aren’t in the spreadsheet either, but I’m happy to say that we can now consider them fully funded with many years to grow (our boys are in 2nd & 3rd grade). We may continue funding up to the amount at which we get a state income tax deduction. Leftovers can always be left to grow for other relatives, including future grandchildren. 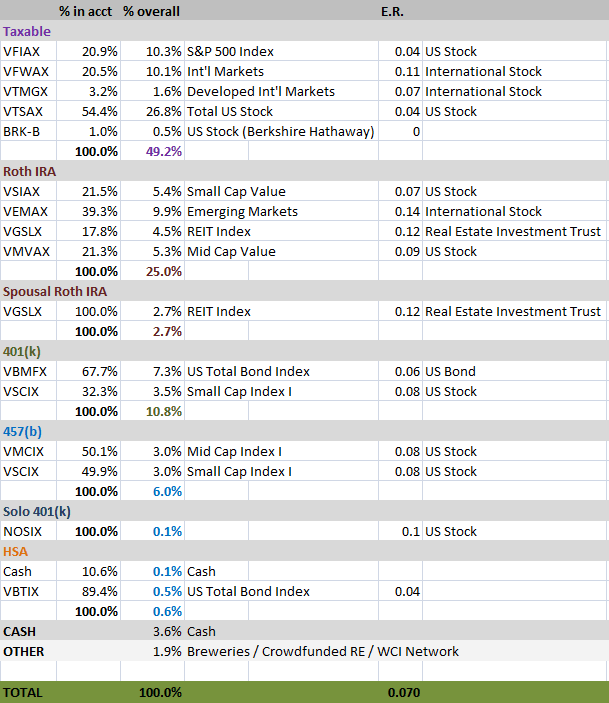 We’re accumulating cash in anticipation of building a home on our recently acquired lakefront property. That project will also be funded by selling our second home (and eventually our primary home), but we’ll need some money to get started, so I’ve stopped investing in the taxable account for the time being.

Only about 17% of our assets are in tax-deferred accounts, and as the 457(b) is depleted within the first decade of retirement, that number will continue to shrink. I like the tax diversification we’ve got, and I fully intend to convert the money in the 401(k) to Roth over time when our income and tax burden drops.

The new lower marginal tax brackets (particularly if you’re married, filing jointly) offer an attractive option to convert tax-deferred dollars to Roth when retired. Any couple with a sizable tax-deferred position can fill up the 24% tax bracket all the way up to a taxable income of $315,000.

Much like my hometown NFL team in purple and gold, our portfolio saw a lot of wins in the last quarter of 2018. Unlike the NFL team, that good fortune continues in the new year for our portfolio.

In the fourth quarter, we had returns of nearly 5%, while the S&P 500 returned just over 6%. This calculation is done by Personal Capital, which allows you to log into multiple investing platforms at once and see your data in aggregate.

Returns were held in check by the Total Bond Fund, which actually lost 0.2% of its value in the fourth quarter of 2017. I typically keep about 10% in bonds and cash, but that’s crept up closer to 12% as I save for the building project that we hope to begin this summer.

On the other hand, Berkshire Hathaway continued to outperform the S&P 500, returning over 8% in the fourth quarter alone. My investment in Warren’s opus only represents 0.5% of the portfolio, though, so it didn’t move the needle much for us.

How did the entire year go? Unlike last year, we didn’t top the reported returns for the S&P 500, but our returns weren’t too far off. Our portfolio returned just over 18% in 2017. I’ll gladly take that any year. The Rule of 72 tells me that my investments would double in four years with steady returns of 18%.

Compound interest is akin to the feeling you get when you step off the treadmill after a good run. Your legs continue to propel you across the gym without conscious effort. You can’t help but move forward. Here’s how our returns look in graphical form.

Much like the fourth quarter results, bonds did what bonds tend to do, which is “smooth the ride” and move total return a little closer to that flat line.

Our REIT investments didn’t fare all that well, either, which is not terribly surprising in the midst of rising interest rates. Still, the mutual fund returned nearly 5% after dropping below the 0% line several times in the first half of the year.

The less-than-stellar returns we saw in the above categories was at least partially offset by the spectacular returns from emerging markets. I’ve got a bit more than 10% of my overall portfolio in Vanguard’s emerging market stock index, and it returned 31.37%. That’s a lot of percentage points, just topping the number of points the Vikings lost by in the NFC Championship (their 6th consecutive loss in an NFC championship game)!

Contributing to our uptick in spending were:

All in all, I’m impressed and frankly surprised we spent less this year than last. In addition to the above expenses, we also spent most of November in Mexico, traveled for the blog (FinCon), and generally tried to prioritize happiness over frugality for frugality’s sake. Fortunately, we hate to waste money, so the frugal choices are often the happy choices.

There are many ways in which we are able to keep our expenses in check, including: 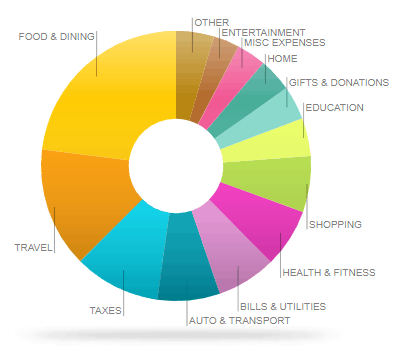 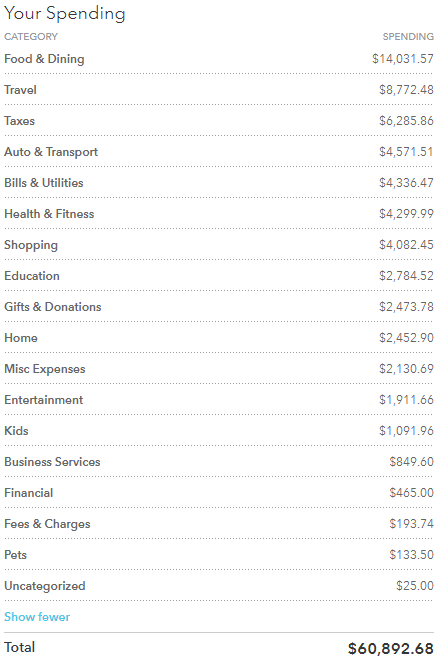 Compared to last year, our Food & Dining bill was over $2,500 higher. I think this can be attributed to more travel which leads to more dining out. I don’t imagine that will change much in 2018 as we travel even more. My resolution to run a mile or more for each beer consumed should cut down on the alcohol bill, though!

The travel bill would be substantially higher if we didn’t score so many free flights via our credit card travel rewards strategies. As we transition into “slow travel” mode for most of our trips, we should be able to keep the cost per day away more reasonable as compared to the manic one-week vacations we were once accustomed to taking.

The education expenses are a combination of piano lessons for the boys, a Spanish program we were using online and the tuition for the four of us in our Spanish immersion experience from November.

As of 1/12/2018, the site had 339 published posts and 38 pages. These have been visited by people in 205 countries, and I’m happy to report that list now includes Madagascar for the first time! Still no Greenland or North Korea.

I could point to many reasons that this happened, and my blog tips page highlights the things I’ve done to grow the site, but the biggest factor has been a partnership with The White Coat Investor in creating the WCI Network.

The Backdoor Roth post has jumped to the top after I updated it with fresh screenshots in 2018 and re-published it. The Tax Reform post was new in December and has been quite popular, as you can see. Thank you to Dr. Stanton Elseroad for his contributions to the bulk of that post.

Google traffic has (finally) become a decent source of traffic. #1,2, and 5 do well in search engines. The 3rd and 4th posts were both featured by Doximity. The comments on the Regret post were interesting (behind login).

Reddit remains #6. I’ve been listed as the 4th most popular financial independence blog in their FI subreddit sidebar, which puts me among some great company. 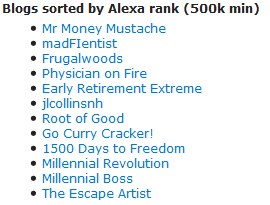 Where do people go from Phyisicianonfire.com? (mainly referred from The Sunday Best & Christopher Guest Posts🙂

I’ve mentioned this before, but whitecoatinvestor.com would very likely show up as #1, but some setting must exist that keep me from seeing those clicks in the Jetpack Site Stats. Passive Income MD, the newest addition to the WCI Network, is new to the Top 5.

We had a blast at FinCon, and Camp FI Southeast was a great way to spend some time with others who are working towards or have already achieved Financial Independence. Mr. 1500 was a speaker there, and he wrote up a fun recap.

I’m looking forward to another meetup of like-minded individuals at the White Coat Investor Physician Wellness and Financial Literacy Conference in early March. I’m excited to put some faces with the names of the commenters on the site and forum.

I’ll also be speaking at Camp FI Midwest. This one is close to home in Minnesota this coming August.

Finally, look for me on stage for the NYSE closing bell on January 30th. I couldn’t turn down the invite from Inspire Investing to be a part of this. Tune in to CNBC at 4:30 Eastern to see my first televised appearance!

How did 2017 treat you or your portfolio? What are you looking forward to most in 2018?