Every three months, I publish an update to let you know how well my portfolio has done, how much we’ve spent as a family of four, and what’s going on with the blog. Some people like to know the blog stats. Weird, I know.

After three years of tracking our family’s expenses, I’ve learned something. We spend about as much as I thought we did. As the late Denny Green famously said, “they are who we thought they were!” That’s us.

Before I started blogging, I had a pretty good idea of what we were spending on credit card statements. It turns out I was right, and I have decided to stop tracking our spending down to the penny. I did so to prove to both you and me that we were actually financially independent, and now we know.

Yes, we are still FI after the recent downturn in the markets. I’ve argued that a bear market can’t really “unFI” you, but that’s a different post.

Using my universal portfolio tracking spreadsheet that I’ve made available for everyone, I’ve updated my portfolio as it stands in early 2019. 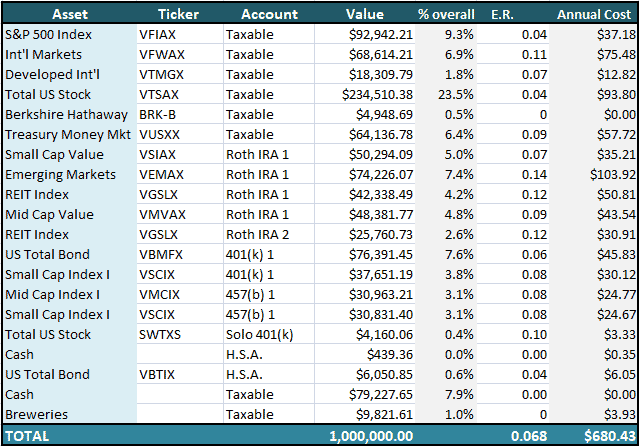 Rather than share the actual values, I’ve altered the dollar amounts to add up to a cool 1 Million dollars. The ratios are perfectly accurate, though.

If you opt not to DIY, please strongly consider a financial advisor who doesn’t charge huge fees or push suboptimal investment products on you. My recommended financial advisors are fiduciary, fee-only advisors with some of the lowest fees you’ll find.

I’ve intentionally strayed from my “desired” allocation as we prepare to build a home, allowing cash to pile up while our equity investments lag a bit. The spreadsheet shows the following, again with modified sums but accurate percentages.

By this time next year, we hope to have built a house, sold a house, and I should be in a position to rebalance the portfolio back to the desired allocation.

If you’d like a copy of the spreadsheet I created, enter your email below, and I’ll send you a link. Well, not me personally… it’s an automated thing. Anyway, you will be subscribed to my email list at least momentarily, but you can opt-out at any time.

Do we have to do this? Really?

It wasn’t pretty. To be honest, though, I knew with certainty that there would be a bear market at some point. I didn’t know when, of course, but I was secretly hoping it would happen before I retire rather than shortly thereafter. And it did happen, at least according to most definitions.

Sorry about that. I should be careful what I wish for!

How did my portfolio do in the fourth quarter of 2018? Quite poorly, and thanks for asking. 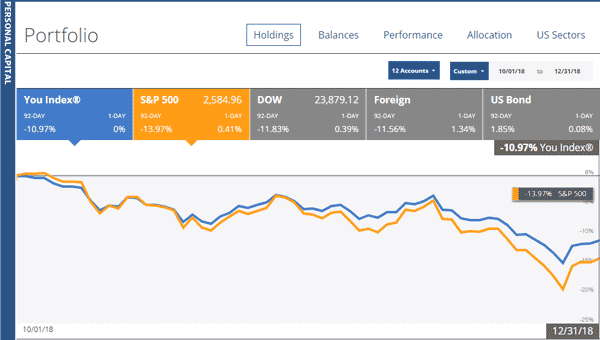 It helps to be holding some cash (in the Vanguard Treasury Money Market Fund (VUSXX) earning 2.3% and state-income-tax free). The cash isn’t represented in my You Index, but the bonds are. The bond index fund I own eked out a slightly positive return of 0.87% last quarter. 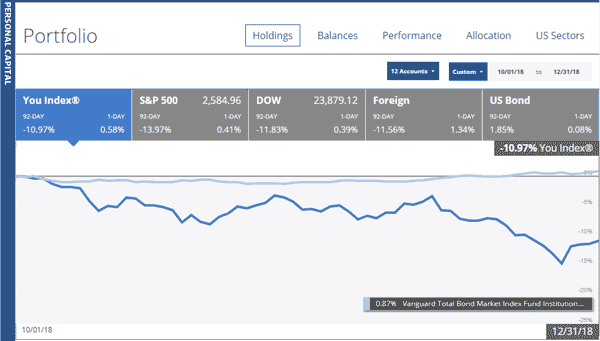 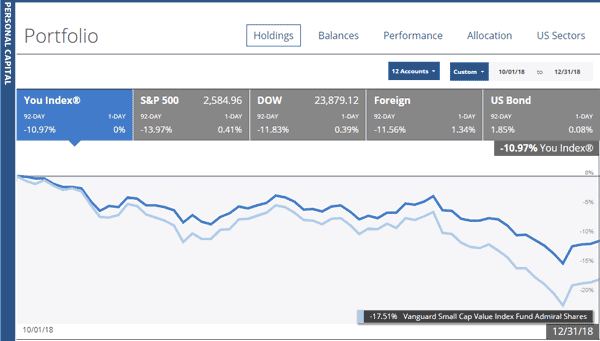 The only individual stock I own, Berkshire Hathaway, only lost 4.6%, and the REIT fund performed better than most stock funds, recording a 6.5% loss. 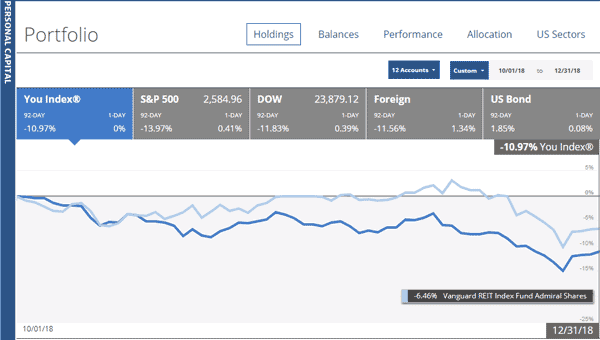 The volatility was impressive. Over the course of a couple of months, I saw about 5 or 6 entire years’ worth of future spending disappear. The day after Christmas, I got a year back, and I’ve gotten a couple more years back since.

I had a little bit of money invested back in 2000 and a low six-figure amount back in 2009. I handled those nasty drops without issue, but this was the first test I’ve had with a seven-figure portfolio.

Although the drop wasn’t (or isn’t to date) nearly as dramatic as the 40% to 50% drops in the first decade of the millennium, but I feel like I’ve passed this test just fine. I pretty much just shrugged my shoulders, understanding this was not abnormal.

The only selling I did was matched with buying as part of some tax-loss harvesting efforts. Since I’ve been hoarding cash this year, there wasn’t a lot of opportunity for me, but I did manage to take some paper losses that will become future tax deductions.

When looking at the bigger picture, we can see that a decent chunk of the fourth-quarter losses was taking back gains made over the course of the first 9 months of the year. 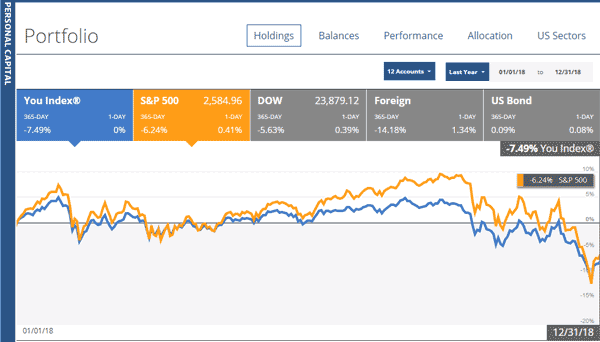 The bright spot? Berkshire Hathaway, with a 3% gain on the year, moving into positive territory in the final week of the year. 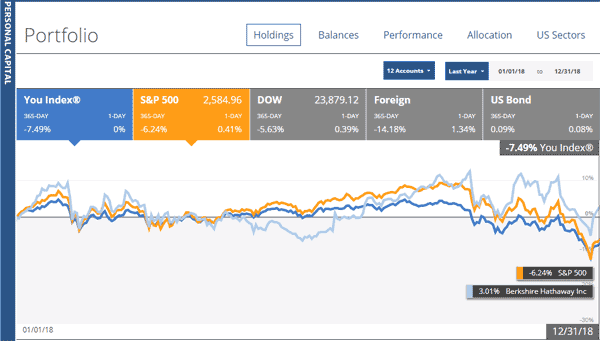 Bonds didn’t fare so well in the increasing interest rate environment. The total bond fund dropped 2.8%. Bonds are poorly correlated with stock market returns but not inversely correlated. They were not a safe haven in 2018. 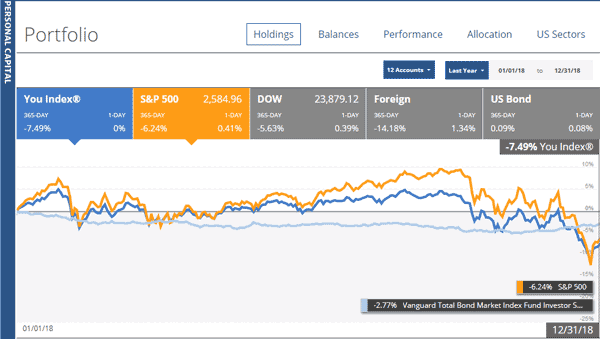 International stocks were a real drag in 2018. My worst performer was the developed markets fund, losing 14.5%. Thanks, Europe. 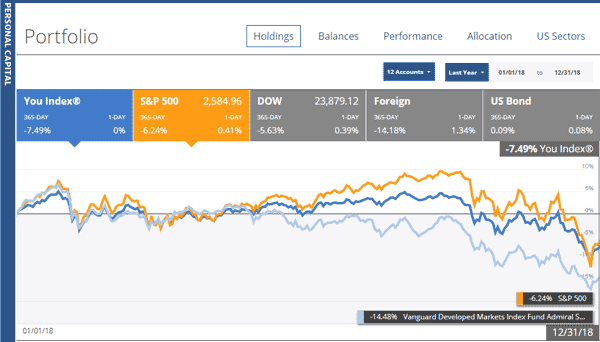 It will be interesting to see what 2019 brings. After 6 trading days, we’re up about 3.5%. If this pace continues, I expect my portfolio to be up about 150% by New Year’s Eve. fatFIRE, here we come!

If you read the introduction, you’ll know that I don’t have exact figures to share.

We did have some big expenses this quarter, though. I spent around $2,500 on four flights to Costa Rica and Honduras — we’ll be going back to another medical mission in May.

And then there was the $28,000 I dropped on a 2017 Nissan Armada. The next big-ticket purchase will probably be a travel trailer to pull behind the beast of a vehicle I now drive.

The consistency was remarkable, but I blew it out of the water with the SUV. Since we tend to replace a vehicle every 5 or 6 years on average (driving two vehicles for 10 to 12 years), the cost should really be spread over that timeframe.

This year, the grand total of our spending was just shy of $100,000, and next year we’ll be spending all kinds of money on building supplies and labor. Eventually, we should settle into a more predictable pattern, but I’m glad I’ve worked “one more year” several times before retiring in 2019.

This blog is now a confident toddler, having celebrated its third birthday yesterday.

E-mail subscribers can skip to the end, as they’ve already seen this data and more. As you may know, I have been donating half of my profits, and I plan to make a six-figure donation in 2019 again.

If you’d like to be included in the next quarterly newsletter to get all the juicy details, please subscribe in the box below. You’ll get some great bonuses, as well.

As of 01.09.2019, the site has 547 published posts and 47 pages. People in 215 countries have visited these. Still no visitors from Greenland, Svalbard, North Korea, Western Sahara, or the Republic of the Congo.

Please tell all of your friends in Greenland, Svalbard, North Korea, Western Sahara, and the Republic of the Congo about the site so we can fill in the rest of the world map!

Don’t worry about those other white spots between countries. I won’t get credit for visits from the Baltic, Black, or Caspian Seas. 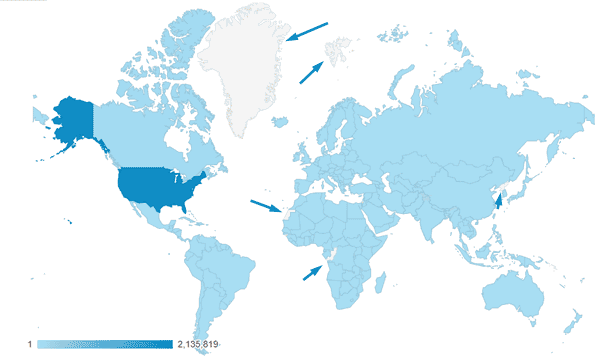 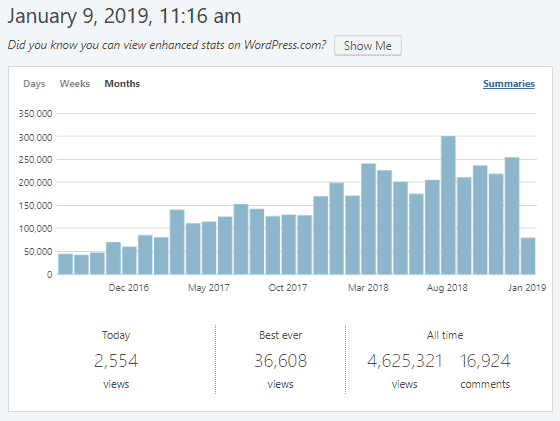 If you’ve got any friends who may benefit from my content, please forward this e-mail to them. The more people who hear the message of financial independence, the better.

Tax Reform! How Physicians and the Self-Employed are Affected dropped out of the top 5.

#2 is a Saturday Selection from PIMD that had amazing traffic over a few days, presumably thanks to Google’s content suggestion in new tabs in Chrome and Android phones. I think physicians are searching online for how much they’ll need to retire, as #3 moved up from the #4 slot last quarter.

Only #4 was a post written in the last quarter, and a couple of others (#2 and #5) were revised and republished in the 4th quarter. #6 was another new post: Physician Retires Early and is Met With Scorn.

Where is my traffic coming from? Top 5 referring sites all-time:

My WCI Network partner Passive Income MD is #6 with 12,924 referrals.

I send a lot of traffic to Bogleheads. I have learned so much from my peers on the forum.

WCI would likely show up at the top, but some must exist that keep me from seeing those clicks in the Jetpack Site Stats. #5 is a new entry. I love Michael Kitces’ deep, detailed dives into financial topics.

I’ll be further elucidating the “marginal benefit” of the backdoor Roth with some projected numbers in the coming months. I plan to review a couple of FIRE books coming out from popular FIRE bloggers. I will review the retention bonuses offered by credit card issuers as welcome bonuses are starting to become a bit more sparse. I’ll revisit stealth wealth and write about Disney World for the FIRE crowd.

In early March, I’ll be presenting as part of a Financial Independence online conference #FIsummit. I’m looking forward to connecting with folks around the world. I will be joined by some great speakers and friends, including people behind Choose FI, the FIRE Drill Podcast, Montana Money Adventures, The Thrifty Couple, and Mr. Money Mustache.

At $49 or $29 and 10% off with the code POF, you might want to consider signing up to pick up some knowledge and motivation from this talented cast of characters. Using my discount code (POF), a portion of your purchase will help support our charitable mission.

I hope you have a great winter, and if you live someplace cold as I do, you find a way to enjoy the outdoors and/or escape for a spell.