The answer to the first question, at least for me, has typically been what money can buy. For a lot of years, money bought me stuff.

In grade school, money bought me football cards and candy. In high school, money paid for movies and first dates. There may have even been a second date one time, but that’s not important.

In college, money paid for tuition and beer. I also spent money on food, clothing, gas, rent, and more beer. The older you get, the more things there are to buy with your money. Furniture, televisions, stereos, gas grills, instant pots, electric bikes, curling shoes, you name it. You also need some shelter for yourself, your family, and all that stuff.

Eventually, though, you get to a point where you realize you’ve already bought all the things you need to live a happy, productive, and efficient life. In fact, if you’re like me or any of the millions of other non-minimalists out there, you’ve bought much more than you’re ever going to need.

When you reach that place in adulthood where you realize buying more stuff or purchasing replacement things for the perfectly acceptable things you already own is pointless, it’s time to reframe the way you think about money.

Fortunately, there’s a book for that.

How to Think About Money

After reading The White Coat Investor’s Review over a year ago, I knew this was a book I needed to read. I’ve enjoyed following author Jonathan Clements‘ work on The Humble Dollar, and he’s got a stellar resume, having written for The Wall Street Journal for more than two decades. It didn’t hurt that Dr. Dahle said it might be the best financial book he’s read in five years.

What attracted me to the book wasn’t the author’s experience and reputation, but rather his message. As I read that review, I kept nodding and nodding and thinking Yes, Yes, a hundred times Yes!

I reached out to Mr. Clements via Twitter (@ClementsMoney), told him how much I knew I would love the book, and how I’d be happy to write a review of my own, and he kindly sent me a personalized copy. 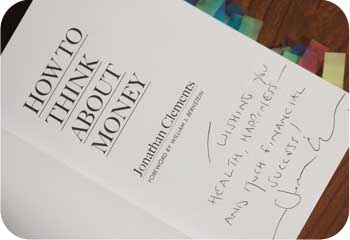 That was a long time ago, and I later had the pleasure of meeting the generous man who sent me that book at our mutual friend Dr. Jim Dahle’s conference. I figured I had better deliver on the promise I made many moons ago and write that book review prior to meeting him. Hence, this post.

Learn how to better manage your student loan debt, and explore refinancing to a lower rate with cash back offers! Student Loan Resource Page

How We Think About Money

How to Think About Money was one big helping of confirmation bias for a guy like me.

It’s a quick read, with about 140 pages of text, a 6-page foreword by Dr. William Bernstein (another esteemed WCI conference speaker), and a handful of pages of references.

Clearly, Mr. Clements and I think alike when it comes to money, and it could be because we’re reading the same reference material and believe in evidence-based money management, but I believe there’s more to it than that. There’s a certain mindset that some people embrace and others will soundly reject no matter what experience or research suggests.

The philosophies discussed in the book are fairly common on the pages of the blogs and books I read, but rather uncommon in day-to-day life for the average American and probably more rare for the typical physician. What sort of philosophies?

Highlights from How We Think About Money

There are more gems than I could possibly list in a book report, and they start before Mr. Clements get a turn. From retired neurologist Dr. William Bernstein’s foreword:

“On the surface, it all seems so obvious: We need money to buy the stuff that will make us happy. No, no, and no again. First and foremost, money buys time and autonomy. Secondarily, it buys experiences. Last, and least, it buys stuff, and more often than not, the stuff we buy makes us miserable.”

Mr. Clements does a great job of highlighting the lessons gleaned from dozens of academic studies on money and happiness. Among the findings are that money doesn’t buy as much happiness as we would think, we overvalue objects and undervalue experiences, spending on others makes us happy, children don’t bring as much joy as we parents claim, and life satisfaction troughs in one’s forties.

I’m 42, and if this is as bad as life is  going to get, I consider myself very fortunate, not to mention happy.

The hedonic treadmill gets appropriate treatment, the benefits of a short commute were featured (the morning and afternoon commutes were two of the three most stressful of 19 daily activities in one study), and the importance of connecting with family and friends were touted as good for both happiness and health.

“When I talk to college students, I don’t tell them to follow their dreams. Instead, I tell them to focus on making and saving money. I even suggest that they might deliberately opt for a less interesting but higher-paying job, so they can sock away serious sums of money.”

He goes on to say there will be time to pursue your passions, and you’ll be better equipped to do so without trepidation when you’re a bit older and more financially secure. Sound advice, I say.

Once again, investing is a topic on which we see eye to eye. He talks about the tyranny of investment fees, the benefits of delaying social security, and the beautiful simplicity of a three fund portfolio.

Referencing The Millionaire Next Door, he reiterates the fact that outward displays of wealth are better indicators of a person’s spending rather than their net worth. Many of the truly wealthy are practicing stealth wealth, blending in with their neighbors in an unassuming way.

The 4% rule isn’t ignored; although it’s not prominently featured, either. He does, much to my dismay, mention a different rule of thumb that states you’ll want about 80% of your pre-retirement income to live well in retirement.

While that math makes some sense for those with ordinary incomes and relatively low savings rates, I still find it frustrating and misleading when retirement needs are matched to pre-retirement income rather than pre-retirement spending, when the latter is the only one of the two that play a role in determining your needs.

The text does a good job reviewing what it means to own stocks and bonds, and what you can expect in returns from each. He also discusses ways to avoid losing your hard-earned money quickly by properly insuring yourself from potential catastrophes

The Chase Sapphire Preferred is my top pick for your first rewards card. It now offers a welcome bonus of 80,000 points worth at least $1,000 when used to book travel (after a $4,000 spend in 3 mo) and other great perks you can learn about here.

When you’ve got so much common ground, it’s tough to come up with many points of contention, but since I write for a different crowd, namely high-income professionals with an interest in early financial independence, I was actually able to come up with a few.

Early retirement doesn’t come up a whole lot, but when it did, here’s what the author had to say:

“We might strive to buy a home in our 30s. In our 40s, our focus often switches to the kids’ college education. With those two goals behind us, we might be in our 50s– and it is too late, because 10 to 15 years simply isn’t enough time to accumulate the money needed for a comfortable retirement.”

Since we became financially independent within a decade on one income without knowing what FI was, I have to call shenanigans on that last line. My tweet on the subject:

When the prospect of early retirement comes up another time, he says:

“Every so often, when I was at The Wall Street Journal, I would receive emails from readers, boasting about how they had managed to retire in their 40s. I would immediately write back, asking a single question, “Do you have children?” The answer was almost always “no.””

While I agree that children can make early retirement more difficult, they shouldn’t add more than a few years for someone with a great savings rate and high income, and the presence of children can be a great motivating factor to make you want to become financially independent before they’ve flown the coop.

Speaking of savings rates, Mr. Clements recommends keeping “fixed costs” at half of gross pay. Note that this does not include discretionary expenses like travel and other experiences, or even good beer.

The Chase Sapphire Preferred is my top pick for your first rewards card. It now offers a welcome bonus of 80,000 points worth at least $1,000 when used to book travel (after a $4,000 spend in 3 mo) and other great perks you can learn about here.

I think it makes more sense to base an appropriate savings or spending rate on after-tax pay. We can’t spend or save the portion that goes to Uncle Sam, so leave that piece out of the equation. I encourage those pursuing financial independence to strive to live on half their takehome pay, using the rest to pay down debt or invest.

Who Should Read How To Think About Money

Your kids when they’re old enough.

I think the people that will benefit the most from this book include:

The book is loaded with knowledge nuggets that simply reaffirmed my beliefs, but may profoundly change the way others think about money.

He closes with a recap, offering twelve suggestions to get the most out of your money. I won’t spoil it for you or plagiarize by listing them all, but I’ll leave you with a portion of the final one.

“The goal isn’t to get rich. Rather, the goal is to have enough money to lead the life we want.”

I couldn’t have said it better myself.

Would you like a copy of this book? Great! Pick one up here.

76 thoughts on “How to Think About Money”

The Chase Sapphire Preferred is an excellent first (or only) card. The welcome bonus is huge & the ongoing rewards are solid. Great travel protection and perks, plus new Lyft & DoorDash perks for 2020!