With another quarter in the books, it’s time for a quarterly update on my investment portfolio, family spending, and blog stats. It’s the 11th quarter since I started this website, and I’m within 11 months of wrapping up what I believe will be my last “permanent” position in anesthesia.

It was also the last quarter of part-time work before returning to full-time anesthesia for the rest of the year. With one of my colleagues departing for a military obligation, I agreed to step up my hours. After learning that he won’t be returning to us, we’re looking at bringing in temporary help while his replacement is identified.

It’s likely I’ll be back to part-time work in January, and I’ll be looking to head south for a spell to escape the Minnesota winter. It’s early October, but it already feels like late fall — friends of mine a bit further north in the state have already seen trees downed in a snowstorm!

Cash is building up as we prepare to build on our lakefront property next spring. We were hoping to get that project underway this fall, but the granters of permits had different ideas.

I don’t include any of our properties (primary home, cabin, or the 7 acres on the water) in the retirement portfolio below. Also not included are two six-figure 529 Plans and $259,000 in donor advised funds. Only dollars that can be used to fund our retirement are listed below.

I’ll be using screenshots from my universal portfolio tracker. You can grab a copy of the Excel sheet for yourself with a quick subscription. Download it and you’re free to unsubscribe at any time, including right away. My feelings will only be hurt a little.

To avoid sharing my exact numbers, I divided the dollar amounts by a factor that would make it all add up to $1,000,000. 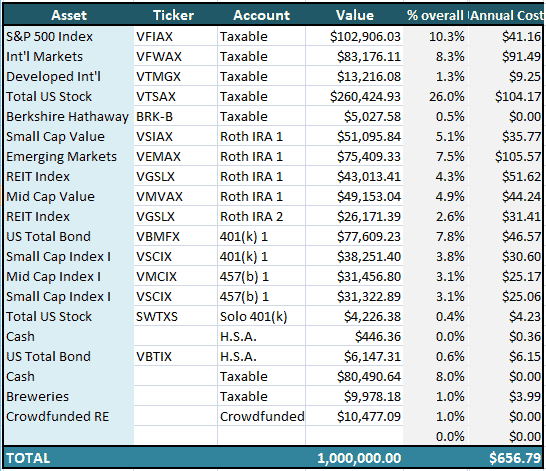 Broken down by category, the percentages look like this:

Anticipating building a home without a construction loan, we’ve been stockpiling cash, leaving us temporarily, but intentionally, heavy on cash. In the spring, I intend to start spending that down, and when we eventually sell our current home, I’ll do some serious rebalancing with new cash. 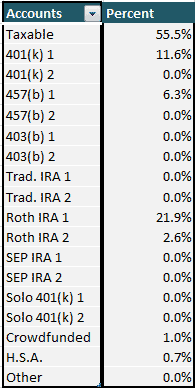 At that point, I’ll probably look more closely at additional crowdfunded real estate investment opportunities. I’ll also be investing more in international stocks, as those have taken a hit lately.

On a percentage basis, about 56% of my investments are in after-tax accounts, including the non-qualified brokerege (a.k.a. taxable) account, cash, and brewery investments. Yes, breweries.

Tax-deferred investments are only 18% of the total, putting us in an excellent position for a low-tax retirement when I stop earning an income one day. Note that will not be next year, as I may be retired from medicine, but not exactly retired. Retired not retired.

About 25% of the money exists in Roth accounts, and there’s a little bit in the HSA and crowdfunded opportunities. I also own a small piece of Passive Income MD, and I should really update that valuation as Dr. Kim is doing amazing things over there.

It’s good to have a diversified portfolio, but this was one of those quarters where diversifying away from U.S. Stocks was not beneficial.

Weak performance from a variety of other asset classes, including bonds, international stocks, and REITs were a drag on my returns in the third quarter of 2018. Overall, according to Personal Capital’s You Index, my returns were 3.7% whereas the S&P 500 returned 7.2%.

Leading the pack, after a rough second quarter in which it lost 6.4%, was Berkshire Hathaway, returning 14.7% last quarter. From worst to first — while it is a stock with a large market cap and many holdings, it’s still a single stock and compared to index funds, it still acts like one.

Bonds “smoothed the ride,” as they tend to do, and in a market where U.S. stocks are performing well, that means they keep my overall returns down, although they only represent a bit less than 10% of my portfolio. Vanguard’s Total Bond Fund lost 0.7% in the third quarter of 2018.

Meanwhile, my cash sitting in Ally Bank is returning 1.9% (before tax).

The biggest loser in my portfolio was emerging markets, but with a drop of 1.75%, it’s a loss I can easily stomach.

The REIT fund was volatile like always, dipping into negative territory a few times and eking out a slightly positive return of 0.52%.

Please don’t get used to this section. At the end of the calendar year, I plan to do away with it.

There are a few reasons. First, I became financially independent without tracking spending or following a budget. I only started tracking it to prove to myself and my readers that I had truly achieved FI.

Second, I’ve been tracking for a full three years now, and without trying, our spending has remained remarkably consistent. We spend between $60,000 and $70,000 a year.

While I expect that to increase with inflation, and perhaps increase a bit more as we have more freedom to travel, our spending habits are pretty well ingrained. We’re not going to accidentally spend twice as much if we’re not paying attention.

Finally, the tracking does take a little time and editing of categories (the stop at Hog’s Breath Saloon in Key West wasn’t “Personal Care” exactly) and it can create new headaches. For example, Mint.com struggled to keep up to date with Chase and several other accounts. Somehow, its futile attempts to log in would lock me out so that I couldn’t directly log in with Chase without calling and having a human manually unlock the account. I gave up on Mint.

Now, I’m tracking with Personal Capital. It works nearly as well, although it doesn’t allow you to divide one expense into more than one category or allow for manual entry of cash expenses. It’s not perfect, but it’s good enough, and I’ll use it until this year is over.

It looks like we spent about $18,000, but what’s not accounted for are reimbursements for tickets to a number of events. I didn’t win in the lottery for NCAA Men’s Basketball Final Four tickets — an expense that was included earlier this year — and I got my $900 back.

I also sold a couple football tickets from last weekend when I was on call for $220 on StubHub. Back in July, I sold two of our Hamilton tickets via the same online broker for $550. We bought tickets for four to the Book of Mormon, but the friends we plan to go with will be paying us back for their two tickets.

Factoring in that “reverse spending,” our actual expenses for the quarter were closer to $16,200. After spending about $33,500 in the first half of the year, we’re on target for an annual spend of about $66,000.

The second quarter saw three consecutive months of month-to-month declines in blog traffic? Would the terrible trend continue? Where’s everybody going? What did I do?!?

Nothing wrong, apparently. We bounced back in a big way this quarter, topping 300,000 pageviews for the first time ever in August. Later this week, we’ll have the two millionth pageview of the year and a couple weeks later, the four millionth pageview since the site’s inception in 2016. 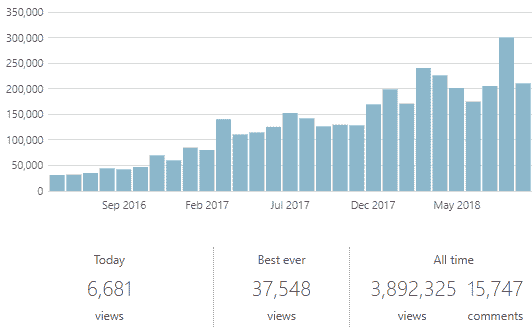 E-mail subscribers (become one today!) have already seen the rest of the data I’ll be sharing.

As of 10.9.2018, the site has 494 published posts and 46 pages. These have been visited by people in 215 countries. Still no visitors from Greenland, North Korea, or a few nations in Africa.

If you’ve got any friends who may benefit from my content, please forward this e-mail on to them. The more people who hear the message of financial independence, the better.

He Has Read Over 250 Investing Books. He Recommends These Three Funds and A Fifth Physician Revisited: The $10 Million Dream dropped out of the top 5.

#2 is a Saturday Selection from PIMD that had amazing traffic over a few days, presumably thanks to Google’s content suggestion in new tabs in Chrome and on Android phones. I think physicians are searching online for how much they’ll need to retire, as #4 is also a new entry to the Top 5.

fatFIRE, which remains in the Top 5 for the 2nd consecutive quarter, is not a new concept, but I was among the first to feature it in a blog post, and definitely the first to start a Facebook Group around the fanciest flavor of FIRE.

Next in line are The PoF Portfolio and Credit Cards for People Who Love Travel and Money.

Where is my traffic coming from? Top 5 referring sites all-time:

Doximity is #6 with 11,576 sessions, followed by Passive Income MD with 9,999. I fully expect that to be a five-figure number momentarily.

My BI “Real Money” generated significant traffic, as did Google. I continue to get strong referrals from WCI and social media.

Where do people go from Physicianonfire.com?  All time clicks:

WCI would very likely show up in the Top 2 or 3, but some must exist that keep me from seeing those clicks in the Jetpack Site Stats. Passive Income MD, the newest addition to the WCI Network rose from #2 for the first time.

That’s one former marketer followed by two with medical degrees and two with legal degrees. Somehow, we all seem to get along. Most of the referred traffic from my site occurs via The Sunday Best.

I’ve got guest posts lined up through the end of the year. We’ll see a Christopher Guest Post from a recent Plutus Award winner, a discussion of different charitable giving vehicles, learn about investing fraud, and hear how a physician retired early and was met with scorn.

I plan to write about the somewhat marginal benefit of the “backdoor Roth,” my experience on a medical mission to Honduras, my first year of good-weather bicycle commuting, and I’m going to ask for your help in a fun charitable giving experiment just before Thanksgiving on 11/20. Don’t worry; it won’t cost you a thing, but you’re going to want to read that post first thing in the morning.

Personally, I’ll be turning 43 next month, we’ll be celebrating the holidays, and we’ll close out the year with a family wedding on New Year’s Eve. It will be a busy but fun few months, and I’ll be ready for life to slow down as I return to my part-time schedule in 2019.

Best wishes for a happy holiday season, victories for your football team when they’re not playing mine, and continued success in your quest for financial independence.