Welcome to the latest quarterly report. I’ll look back on the last three months, the 10th quarter that has come and gone since I started this website in early 2016.

I like to focus both on where we’re going and where we’ve been. I’ll start with an update on my investment portfolio, will review the last three month’s and year-to-date spending, and finish with a slew of blog statistics detailing website traffic, how it finds me, and where it’s going from here.

If you’d like to receive my quarterly newsletter describing my online income and a few other tidbits (like which brewery I own 4% of and visit quite often in the summer), please consider subscribing — you can do so here.

No major changes here. I continue investing in my 401(k) throughout the year so that I’ll continue to get the employer match. Cash is building up as we prepare to build on our lakefront property as soon as this fall. The new place will likely take the place of both our primary home and our second home, a lake cabin.

I don’t include any of the three properties in the retirement portfolio below. Also not included are a couple of six-figure 529 Plans and $252,000 in donor advised funds. Only dollars that can be used to fund our retirement are listed below. 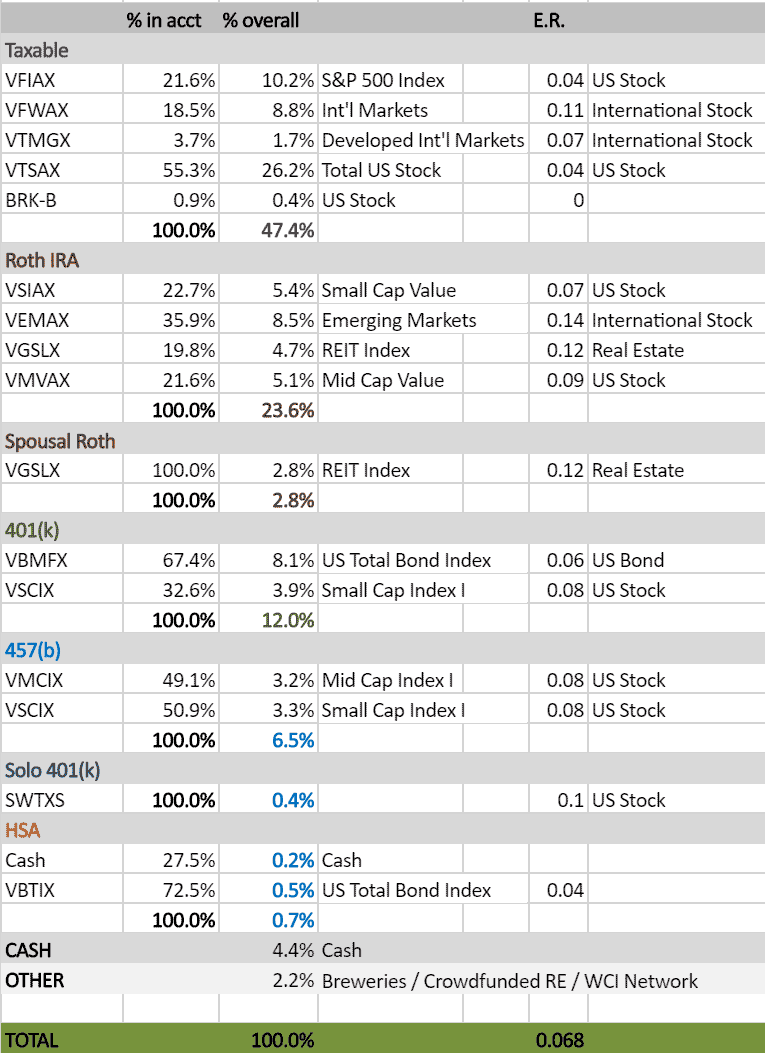 At the moment, about 30% of our money is in Roth dollars, and over half is in other after-tax money (taxable, cash and other). The tax-deferred portion is 18.9% of our portfolio.

I’m very happy with this tax diversification; I’ve made the brash statement before that My Money is Worth More Than Your Money. If a substantial portion of your invested dollars are in tax-deferred accounts, the statement holds true.

Since I haven’t been investing in my taxable account much at all this year (although I have made a few crowdfunded RE investments), I haven’t had much opportunity to tax loss harvest. I did take a loss in VFWAX for a few hundred dollars mid-June and jumped back in just now with some VMGX.

Normally, I exchange on the same day so I don’t sit out of the market at all, but knowing I’ll be needing cash sooner than later, I figured I’d just hold cash. When international funds continued to drop, and I received my quarterly dividends of about $8,000, a sum similar to what I sold, I decided to go ahead and make the delayed exchange.

Once again, I have a few losers to report as the market has zigged and zagged and mostly gone sideways in the 2nd quarter of 2018.

The combination of a handful of losing asset classes and some cash drag (I’m currently earning 1.75% APR in Ally bank) left me with a return of 1.65% according to Personal Capital’s “You Index” compared to the S&P 500, which had a return of 2.93%.

Let’s start with the best performer among the bunch. The first quarter dog made a decent comeback in the second quarter, with the REIT index fund returning 8.83%.

Small caps performed well, also. Growth stocks have outperformed value so far this year, and the small cap index in my 401(k) and 457(b) has both.

Bonds did what bonds tend to do — offer a smooth, non-volatile ride. They’re the lazy river in this waterpark, losing a modest 0.86% in the second quarter.

I told you there were some losers. International funds did not fare well this last quarter, and emerging market really took a dive, looking like the rapid plunge slide, losing 9.12% in three months.

A stalwart stalled last quarter. I didn’t make the May stockholder’s meeting, but I’ll bet there were some grumbles as Berkshire Hathaway managed to do poorly while the small caps had a heyday in the second quarter. BRKB lost 6.43% since April Fool’s Day, no foolin’.

With a whole lot of travel and a $2,400 orthodontist bill, I knew that first quarter expenditure was a bit of an aberration.

We’ve come down to earth in the second quarter (and not the Hawaii part of earth, where we spent about a quarter of the first quarter).

We did spend $1,400 as the final installment on our Cruise to Cuba (it’s not too late to join us). I scored Hamilton tickets for an August show in Minneapolis and paid biannual property taxes on our primary home.

The rest of our quarterly expenses were pretty much ordinary day-to-day stuff. We don’t track as closely as we once did, but with everything going on a credit card or from our checking account, all the expenses are logged.

The categorization may not be perfect, though. I know some of the Costco purchases were gifts or clothing and not grocery, but I’m not that dedicated to break down the receipts. If I didn’t have this blog, I probably wouldn’t track at all. Thank you for keeping me honest. 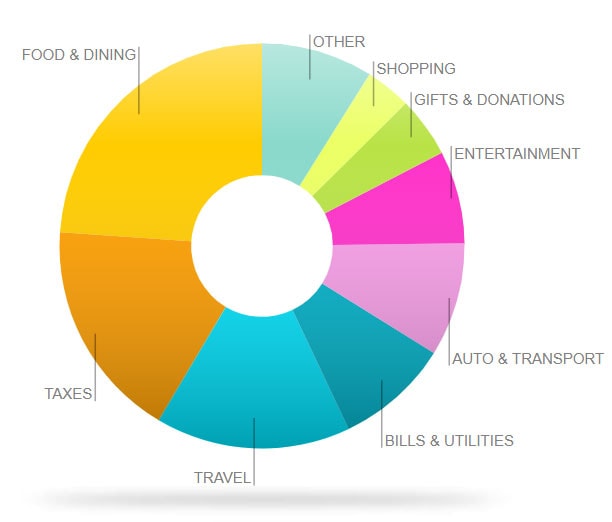 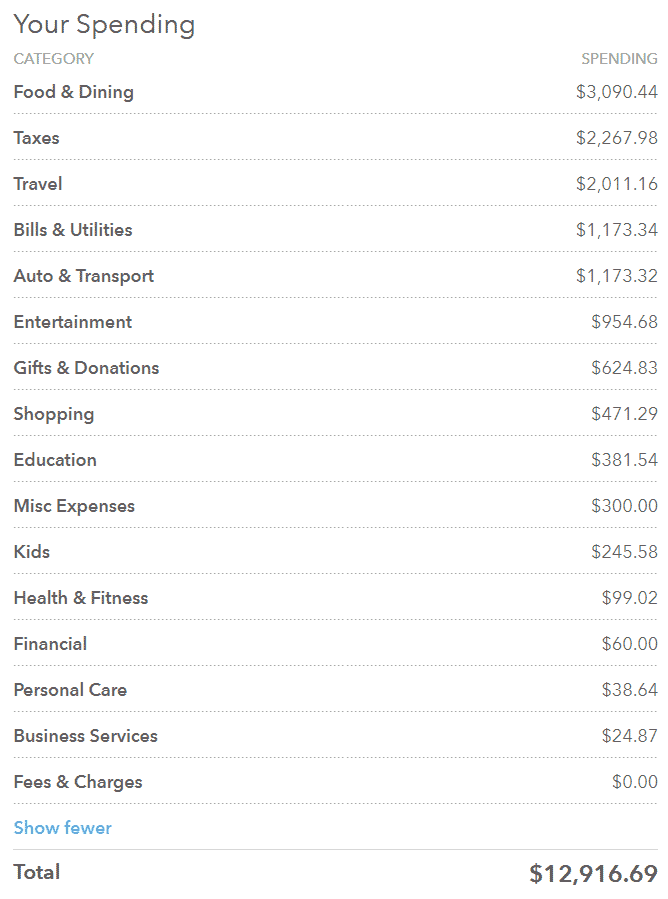 Our spending plunged by about $8,000 to under $13,000 for the quarter, despite the four Hamilton tickets. We’re on pace to spend about $67,000 if the second half looks like the first. I’m guessing it will be a bit less than that, as the only big travel plans have already been paid for.

Much like last year, the site had a really strong month of March and things have trailed off a bit since then. I see this as the summer slide. There are just so many better things to do this time of year than read blog posts. Like sliding down slides, for example.

We did cross the 3 million pageview mark last month, which is a pretty cool milestone, and I imagine the numbers will begin to rebound as the fall begins, the air starts to cool, and we start thinking about our finances as the end of the year approaches. Either that, or the recent trend will continue until I have no readers left by early next year. Time will tell! 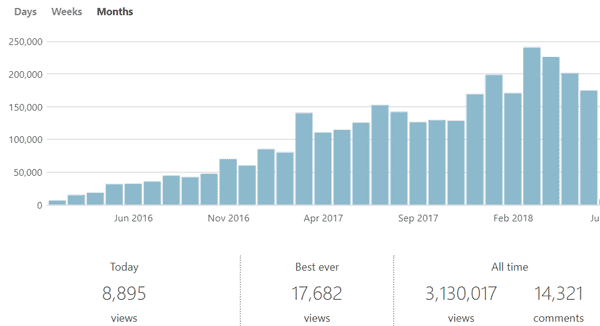 As of 7.1.2018, the site has 437 published posts and 45 pages. These have been visited by people in 212 countries. Still no visitors from Greenland, North Korea, Western Sahara, Eritrea, or Republic of the Congo.

If you’ve got any friends who may benefit from my content, please forward this e-mail on to them. The more people who hear the message of financial independence, the better.

The Backdoor Roth post gets lot of search engine traffic. I’ll be sure to update it again in early 2019. The $10 Million Dream post is new to the Top 5, replacing my Stealth Wealth post. A lot of people search retiring on $10 Million, apparently.

fatFIRE is not a new concept, but I was among the first to feature it in a blog post, and definitely the first to start a Facebook Group around it. The credit card post was popular because people love free travel. #4 is a Saturday Selection from WCI Network member Passive Income MD, and I have no idea why one particular Sunday Best had at least 1,500 more views than any other this last quarter.

Next in line at #6 is How Much Money Does a Doctor Need to Retire, a common question.

Doximity is #6, just as it was before.

Facebook has topped WCI for the first time as a source of traffic. I wrote a guest post at Can I Retire Yet, which, along with a couple features in their roundup series, led to some solid traffic this quarter.

Where do people go from Physicianonfire.com? (mainly referred from The Sunday Best & Christopher Guest Posts): All time clicks:

I’ve mentioned this before, but WCI would very likely show up as #1, but some setting must exist that keep me from seeing those clicks in the Jetpack Site Stats. Passive Income MD, the newest addition to the WCI Network rose from #6 to #3, bumping Nerd’s Eye View off the list.

The last two each wrote a CGP featured on a Thursday this quarter.  ESI Money does well with his millionaire interview series, which I frequently link to, Early Retirement Now has his ever-popular SWR series, and PIMD benefits from Saturday Selections as a part of the WCI Network.

Thank you to my loyal readers, subscribers, and if you’re here for the first time, welcome! I hope you’ll stick around.

In the coming months, I’m looking forward to spending a long weekend with dozens of “FIREwalkers” at the Camp FI Midwest event late August. I attended one near my old stomping grounds of Gainesville, FL in January, and it was a great time. This time, I’ll be a speaker, talking about the additional challenges of reaching FIRE as a family with children.

I’ll also be speaking about a month later at FinCon18 in Orlando, although I don’t know the topic(s) just yet. I believe I am part of two panels that were selected for the final agenda, but I may only get to do just one. When I know more, I’ll be sure to let you know!

Leading up to FinCon, a number of us bloggers and ‘casters are cruising together to Havana, Cuba, and Key West. Details on the cruise can be found here, and you’re welcome to crash the party. We’ll be bringing our boys, who had a blast on our last family cruise two and a half years ago. But don’t mention this cruise if you meet them in the meantime (at Camp FI, for example)– it’s still a surprise, and we’re hoping to keep it that way.

Have a great holiday, celebrating our nation’s independence while secretly plotting your own. 🙂